The U.S. Government Accountability Office (GAO) developed four policy options that could help enhance the benefits or mitigate the challenges of blockchain technologies.

In general, the policy options identify possible actions by policymakers, which may include Congress, federal agencies, state and local governments, academic and research institutions, and industry.

In addition, policymakers could choose to maintain the status quo, so they would not take additional action beyond current efforts.

Blockchain is not a new technology, but an innovative way of using existing technologies.

Its primary function is to create a tamper-resistant ledger for digital assets, such as cryptocurrencies.

The ledger is tamper-resistant because blockchain technology duplicates data about the ownership and transfer of these assets across many computers and users.

This distribution reduces the likelihood that a single bug or rogue user could compromise the integrity of the network or tamper with the ledger. 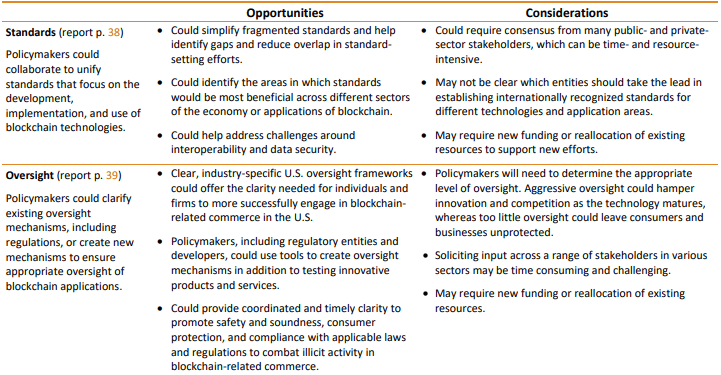 The GAO highlights that blockchain combines several technologies to provide a reliable and tamper-resistant record of transactions conducted by multiple parties without a central authority such as a bank.

Blockchain can be used for a variety of financial and non-financial applications, including cryptocurrency, supply chain management and legal records.

The GAO found blockchain to be useful for some applications, but limited or even problematic for others.

For example, because of its resistance to manipulation, it can be useful for applications involving many participants who don’t necessarily trust each other.

But it may be too complex for a few trusted users, where traditional spreadsheets and databases may be more useful.

Also, blockchain, according to the GAO, can raise security and privacy concerns and can be energy-intensive.

For example, it could be used to organize supply chains, create less hierarchical organizations and document real estate ownership records.

However, most of these efforts have not yet moved beyond the pilot phase and face challenges. For example, most blockchain networks are not designed to be interoperable and cannot communicate with other blockchains.

Organizations that want to use blockchain also face legal and regulatory uncertainties, and have found it difficult to find skilled workers to implement blockchain.

At the same time, financial applications of blockchain have the potential to reduce costs and improve access to the financial system, but they also face multiple challenges.

Cryptocurrencies, probably the best known application, are a digital representation of value protected by cryptographic mechanisms, which facilitates payments.