At the end of the fourth quarter of 2021, 24 million 576,386 fixed Internet accesses were reported nationwide. 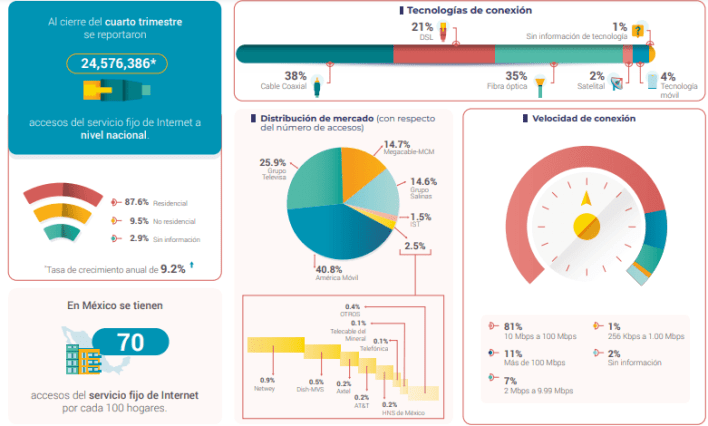 In contrast, Televisa increased its coverage in this same indicator, from 24.7 to 25.9 percent.

This company is the leader in integrated telecommunications services in Latin America.

Excluding China and India, it is the largest worldwide in terms of mobile subscribers.

With the deployment of its communications platform, it offers its customers a portfolio of services and communications solutions in 23 countries in Latin America, Central and Eastern Europe.

Mexico has two authorities that promote and guarantee competition: the Federal Economic Competition Commission (Cofece) and the IFT, which are autonomous constitutional bodies.

However, although the Federal Economic Competition Law sets the specific competencies of each institution, if there were a discrepancy as to their competence, the conflict would be resolved in the Collegiate Circuit Courts in administrative matters, specialized in economic competition, broadcasting and telecommunications.

Since 2017, four such cases have been resolved in the courts, three of which were related to digital markets.