Latin America‘s beverage, tobacco and food exports have been the most dynamic among all manufacturing sectors over the past 20 years.

Their value increased almost fivefold and the regional surplus increased sevenfold, according to a report by the Economic Commission for Latin America and the Caribbean (ECLAC).

South America is largely in surplus, Central America is close to balance and the Caribbean is in deficit.

Brazil, Mexico and Argentina together account for two-thirds of regional exports. 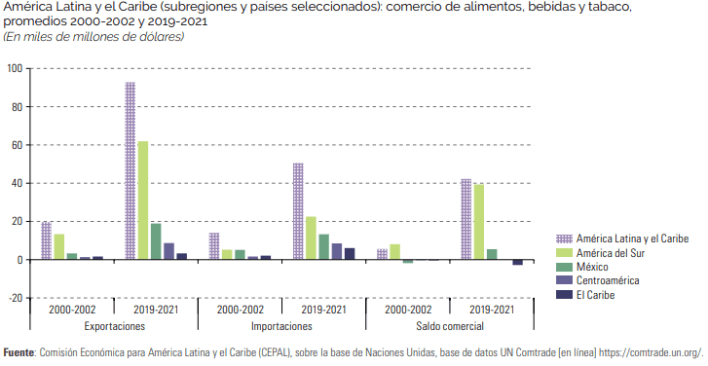 In 2021, these countries ranked ninth, 16th and 23rd, respectively, among the world’s leading exporters in the sector.

Food exports are quite diversified in terms of their destinations.

As in other sectors, the United States and the region itself are the main destinations, but China, other Asian countries and the European Union also have important shares.

Growing geopolitical tensions, technological advances linked to the fourth industrial revolution and the need to reduce the carbon footprint of freight transport seem to be converging towards a scenario of shortening or regionalization of international production networks, in which multinational companies seek to reduce their exposure to supply disruptions and move closer to their main consumer markets.

From ECLAC’s perspective, this scenario offers attractive opportunities for the region, especially associated with the arrival of manufacturing companies interested in approaching the U.S. market.

Given the importance of geographic proximity in this strategy, the opportunities associated with possible nearshoring processes seem to be concentrated in countries such as Mexico, Costa Rica and the Dominican Republic, which also have free trade agreements with the United States.

Particularly in South America, the future of the manufacturing export sector is linked to the revitalization of intraregional trade.

This requires generating a broad and stable market that combines an efficient scale with the minimization of transaction costs associated with cross-border productive integration.

In turn, ECLAC considers that this requires integration initiatives that transcend existing agreements and move towards convergence among the various subregional groupings.

Beyond tariffs, the convergence agenda includes a number of very important issues, such as the strategic use of national public procurement systems, regulatory harmonization and the establishment of regional trade facilitation agreements.