Considering the 16 energy markets in which it operates, the company Acciona registered a year-on-year increase of 6.2% in its installed capacity in 2021.

The ordinary net investment of the different Acciona businesses in 2021, excluding the investment in inventories of the Real Estate business, totaled 1,319 million euros, compared to 829 million in 2020. 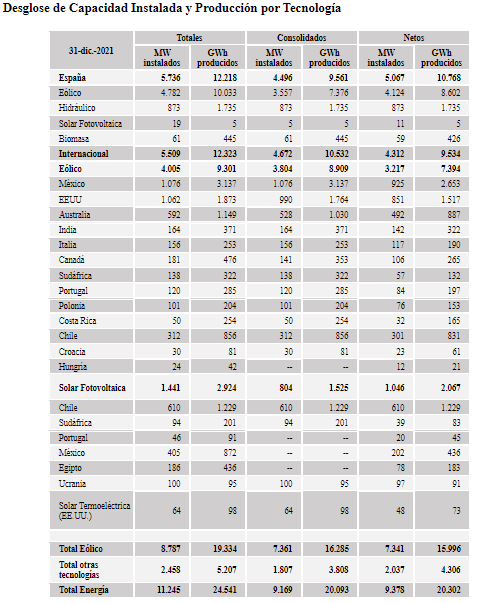 At a consolidated level, installed capacity increased from 8.6GW to 9.2GW, 6.2% more.

As of December 2021, there was 691MW of capacity under construction, mainly in the United States and Spain. The company plans to install 0.8GW in 2022.

Production during the period experienced lower-than-expected growth due to extreme weather in the United States, a worse resource across the board, and as a result of spills (curtailments).

At the same time, consolidated production exceeded 20TWh for the first time, with production reaching 20,093GWh, an increase of 3.3% compared to the previous year.

◾Growth of 49.9% in Spain, mainly due to the increase in income from energy sales, both in volumes and in price. Generation revenues grew despite lower production.

◾Increase of 105.0% in the United States due to strong prices in the first quarter in Texas.

◾Increase of 49.2% in Chile due to higher prices of injection nodes.

Rest of Europe increased its income by 40.5% to reach 231 million euros.