Yum Brands increased its same-store sales in its KFC, Taco Bell and Pizza Hut divisions in the second quarter of 2021.

Same-store sales growth is the estimated percentage change in system sales for all restaurants that have been open in the YUM system for a year or more, including those temporarily closed.

From time to time, restaurants may be temporarily closed due to remodeling or image enhancement, reconstruction, natural disasters, health epidemics or pandemics, owner disputes, or other issues. 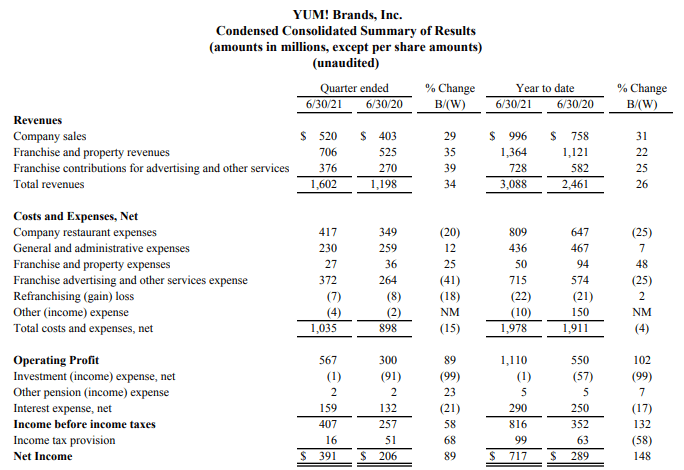 This company closed the second quarter of 2021 with 51,096 KFC, Pizza Hut and Taco Bell restaurants in more than 150 countries and territories.

The company also operates the concept of The Habit Burger Grill.

The KFC, Pizza Hut, and Taco Bell brands are world leaders in the chicken, pizza, and Mexican-style food categories, respectively.

Habit Burger Grill, a concept that Yum Brands acquired on March 18, 2020, is a fast-casual restaurant concept that specializes in grilled burgers, sandwiches, and more.

As of December 31, 2020, 98% of Yum Brands units were operated by franchisees or independent licensees under the terms of the franchise or license agreements.

System sales worldwide, excluding foreign currency translation, grew 26% in the second quarter, with KFC at 35%, Taco Bell at 24% and Pizza Hut at 10%.

The company’s results benefited from increased online demand fueled by the Covid-19 pandemic.