Economists at the World Trade Organization (WTO) estimate that around 80% of world trade is conducted in a non-discriminatory manner, despite all the preferential agreements that exist.

Part of the reason is that a substantial amount of merchandise crosses borders duty free.

While the WTO rules cover almost all (98%) of world trade, the multilateral rules govern the trade relations of its 164 Members, to which 23 countries in the process of accession to the WTO could join.

The multilateral trading system, along with regional and bilateral trade agreements, share the task of regulating world trade, WTO Deputy Director General Alan Wolff said on August 11, speaking at a virtual event organized by the American Association of Exporters and Importers.

On the question of whether the future of trade is multilateral or bilateral, Wolff said that both answers were clearly correct as the world became smaller and more complex.

Why was an exception made for preferential agreements when the fundamental principle of the multilateral trading system is exactly the opposite, namely non-discrimination (most-favored-nation treatment)?

According to Wolff, the economic theory behind these deviations from nondiscrimination is that they will result in more trade creation than trade diversion.

“In concrete terms, the non-signatories, we can infer, tolerated the creation of the European common market, the EU-EFTA free trade agreement and the expansion of the EU, not only for geopolitical purposes, and the American Free Trade Agreement North (NAFTA, revised as USMCA), not only because Regional Trade Agreements (RTAs) in general are authorized by GATT rules, but because they are based on the belief that all countries that trade with them will obtain commercial benefits net, ”he said.

From their perspective, it is highly likely that the African Continental Free Trade Agreement (AfCFTA), which covers a continent where intracontinental trade has always been limited, will also pass this qualitative test.

The simple answer for Wolff is no. The more nuanced answer is that the future belongs to trade agreements of different geometries. Globalization drives an even greater need for both types of agreements, multilateral, as well as electronic commerce in a digital world, and bilateral / regional / plurilateral agreements provided that significant progress can be made at the sub-multilateral level. 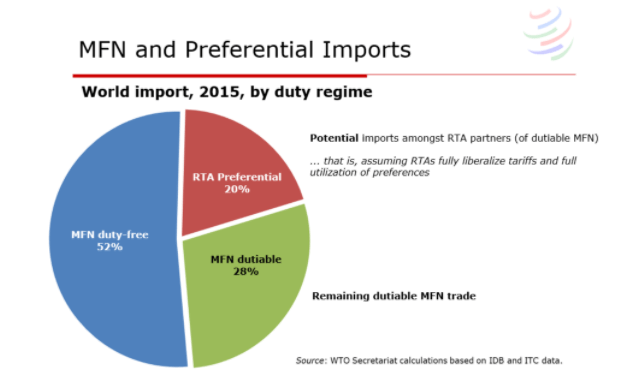 With the proliferation of bilateral and regional trade agreements, and the history of not incorporating truly comprehensive multilateral agreements into the WTO canon, one might wonder if the WTO, to borrow a phrase from the great Spanish novelist Carlos Ruiz Zafón, is “a relic of a vanished civilization ”. “This is not the case at all,” he said.

The WTO estimates that global trade flows will show a year-on-year drop of 13%, which was considered its optimistic forecast in the context of the severity of the Convid-19 pandemic.

His pessimistic forecast was that world trade would fall 32% annually.

The WTO estimated a drop of 18.5% year-on-year in global product trade in the second quarter of 2020. According to its statistics, the volume of merchandise trade fell at a rate of 3% year-on-year in the first quarter.

The annual trade forecast published by the WTO on April 20 took into account the considerable degree of uncertainty regarding the severity and economic impact of the pandemic and described two possible trends: a relatively optimistic scenario in which the volume of world merchandise trade would contract by 13% during 2020, and a pessimistic scenario where world trade would decline by 32%.

The WTO is the only international organization that deals with the rules governing trade between countries.

The pillars on which it rests are the WTO Agreements, which have been negotiated and signed by the vast majority of countries that participate in world trade and ratified by their respective parliaments.

The objective is to help producers of goods and services, exporters and importers to carry out their activities.