World trade will grow at twice the rate of world GDP in 2021, the World Trade Organization (WTO) estimated.

While the WTO estimates that global product trade will climb at a year-on-year rate of 10.8% by 2021, it forecasts market-weighted GDP growth of 5.3% for the same year.

Earlier, in March, the WTO had estimated that world trade would grow 8% and that the global economy would grow 5.1% in 2021.

GDP growth has been driven by strong support from fiscal and monetary policy, and by the resumption of economic activity in countries that have been able to implement Covid-19 vaccines on a large scale. 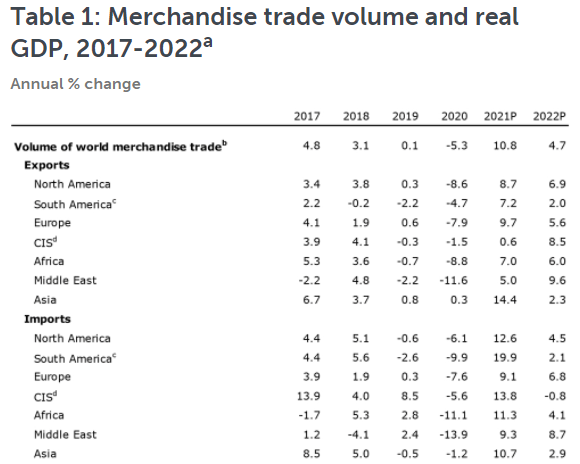 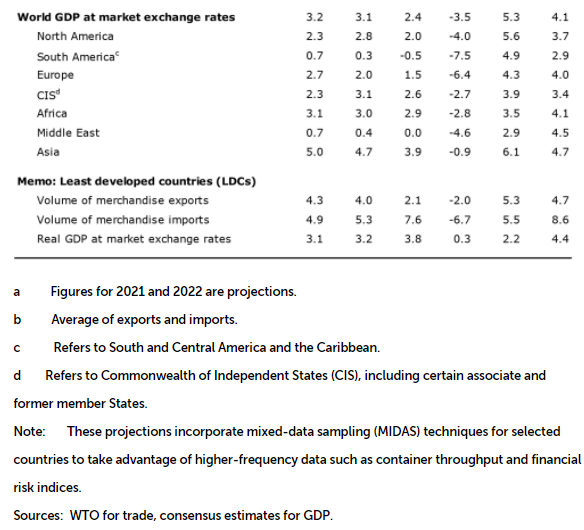 In the years leading up to the global financial crisis (1990-2007), international merchandise trade grew roughly twice as fast as world GDP at market exchange rates, but subsequently slowed at roughly the same rate on average.

If the forecast is fulfilled, this would indicate that the pandemic will not have had a fundamental impact on the relationship between foreign trade and income.

For the WTO, the risks to the forecast remain to the downside, but the relative importance of those risks is difficult to measure. They include inflation spikes, longer port delays, higher shipping rates, and prolonged semiconductor shortages, and supply-side disruptions are compounded by the rapidly and unexpectedly strong recovery in demand in advanced economies and many emerging.

For now, the pandemic itself poses potentially even greater risks to global trade and production, especially if more deadly variants emerge.

The recent spikes in inflation are likely temporary, driven by supply shocks affecting certain sectors in specific economies, as opposed to the unexpectedly strong recovery in demand.

However, if inflationary expectations take hold, central banks may feel the need to tighten policy early on. This could create negative spill-over effects, which would eventually affect trade flows. The post-pandemic period may experience some periods of volatility as monetary policy normalizes and governments shift to more sustainable fiscal policies.