World trade is slowing, while manufacturing output is weakening in 2022, according to estimates by the European Central Bank (ECB).

Overall, the outlook for world trade has deteriorated. 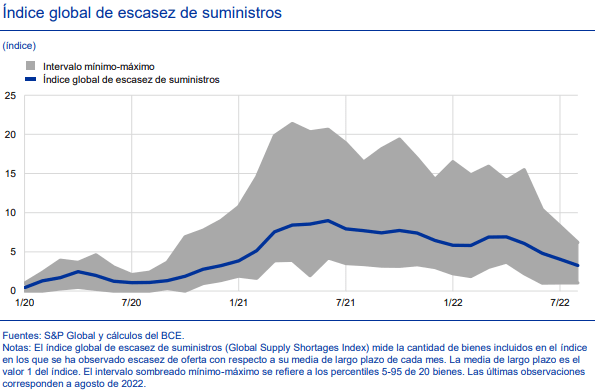 Compared to the June projections, the outlook for world trade and euro area foreign demand has been revised downward for the later years of the projection horizon.

However, for 2022, the ECB has revised upwards in both cases, due to the fact that, earlier this year, trade showed more dynamism than expected in advanced economies, especially in the UK and non-euro area European countries.

Meanwhile, the weakening of global manufacturing activity is affecting trade, which already started to slow down in the spring of this year.

Despite supply-side distortions stemming from the tightenings imposed in key Chinese provinces this spring, global goods trade is showing a clear loss of momentum as private demand for goods gradually normalizes in advanced economies from the high levels reached.

Moreover, the ECB’s outlook for global goods trade flows continues to deteriorate, as indicated by manufacturing new foreign orders, which remained in contractionary territory for the second consecutive month in August.

Against this backdrop, supplier lead times shortened, although they remain longer than before in some major economies, such as the United Kingdom and the United States.

Supply shortages also eased for a wide range of goods in the manufacturing sector, which, together with moderating demand, helped to alleviate some of the global supply pressures. However, some supply bottlenecks remain.