The 64 countries included in this indicator accounted for approximately 98% of global crude steel production in 2020. 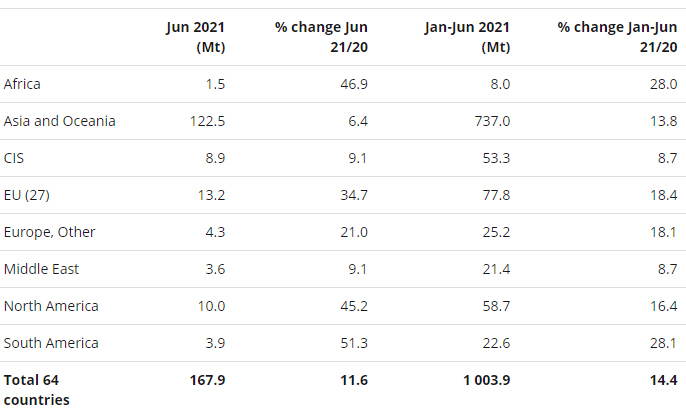 Global steel trade had seen a moderate decline in recent years, but the slowdown accelerated dramatically in 2020 as the impacts of the Covid-19 pandemic depressed demand for steel worldwide, the OECD reported.

Of course, the global steel industry is cyclical, highly competitive, and historically characterized by excess capacity.

Additionally, other materials, such as aluminum, plastics, and composites, compete with steel in various applications.

Some of the major steel exporters saw double-digit declines in their shipments abroad during 2020, while several others have weathered the recession somewhat better.

China experienced a 16% contraction in steel exports in January-September 2020, and a temporary shift to a net import trade balance for several months after June.

More recently, according to the OECD, steel exports have started to recover, steel imports have fallen and the trade balance appears to be returning to surplus.

Steel exports from the European Union contracted dramatically in 2020, falling 18.5% in January-September, relative to the same period in 2019, with a slightly lower rate of decline in imports.

In the rest of Europe, Turkey‘s steel exports decreased by just over 10% during the same period in 2020, while steel imports increased.

Among other major steel exporting economies, Japan and Korea have experienced lower percentage declines in their steel exports during 2020 compared to many other economies.

In the Americas, the United States and Brazil recorded sharp declines in steel trade in 2020.

Brazil is the largest exporter of the two, but its export performance has weakened in recent years.

The main steel exporters with positive growth in shipments abroad during 2020 are India and Russia, which amounted to 45.2 and 12.4%, respectively, during the first nine months of the year.