The October PMI surveys indicated that the slowdown in global economic activity continued for the third consecutive month, with the services sector joining industry in contraction territory.

At the same time, business optimism fell to its lowest level in 28 months as new order inflows and international trade flows continued to decline in the face of mounting economic, inflationary and political pressures.

The J.P.Morgan World Composite Manufacturing Index – compiled by J.P.Morgan and S&P Global in association with the ISM and IFPSM – fell to 49.0 in October from 49.6 in September, its lowest reading since June 2020. 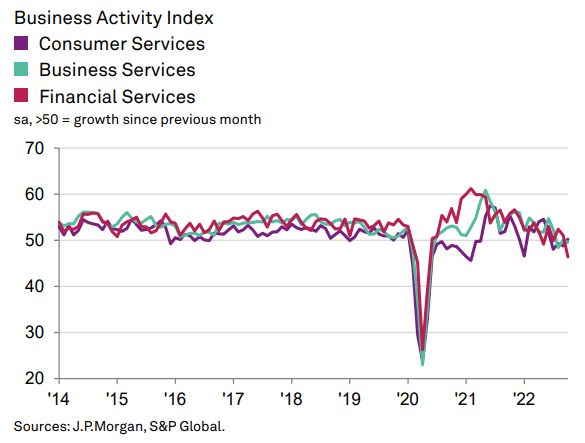 Three of the six subindustries covered by the survey-business services, financial services, and intermediate goods-experienced a decline in output, with rates of contraction particularly sharp in the latter two.

Activity levels increased in the consumer goods, consumer services and investment goods categories, although growth was only marginal in all three.

In contrast, Japan, India and Brazil recorded expansions, with growth accelerating in each country.

In October, the level of new business inflows contracted for the third consecutive month.

Although the pace of decline was slight, it was the steepest since June 2020.

Among the six subindustries covered by the survey, only business services recorded an increase in new job inflows.

Declines in economic activity and new orders contributed to a further drop in business optimism during October.

Meanwhile, the labor market remained resilient at the start of the fourth quarter.

In October, employment rose for the 26th consecutive month, albeit by one of the weakest degrees in that sequence.

Most of the economies covered saw their staffing levels rise, including the United States, the euro area, China and Japan. Only Spain, Russia and Kazakhstan recorded job cuts.