World inflation continued to be high, remaining at levels not seen in decades in some of the main economies, according to Banco de México (Banxico).

This has continued to reflect price pressures in a wide range of items, derived from the ongoing imbalance between the recovery of demand and supply in various markets. 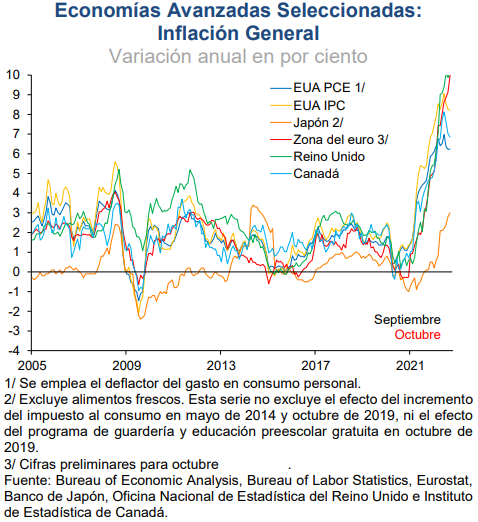 However, according to the minutes of Banxico’s Board of Governors meeting on the occasion of the monetary policy decision announced on November 10, 2022, pressures on commodity prices and disruptions in global supply chains have shown signs of easing.

Banxico implements an inflation targeting scheme as a framework for conducting monetary policy, which permanently targets an annual increase in the National Consumer Price Index (NCPI) of 3%, with a variability interval of plus or minus one percentage point.

In some of the major advanced economies, the recent moderation in energy inflation has been reflected in a decline in headline inflation.

Nevertheless, in most of these economies headline inflation remains significantly above their central banks’ targets, while core inflation has continued to rise.

In the United States, headline consumer price index inflation declined slightly from an annual rate of 8.3% in August to 8.2% in September, remaining at an elevated level.

This decline mainly reflected a reduction in energy and food inflation.

Personal consumption expenditure deflator inflation remained unchanged at 6.2% year-over-year between August and September, while core inflation rose from 4.9% to 5.1% in the same period.

In a large number of major emerging economies, headline inflation continued to rise and remained significantly above their central banks’ target.

It has also been affected in some economies by the depreciation of their currencies.

Although in some cases headline inflation has been reduced due to moderation in the energy sector, it remains high.

In the environment described above, the central banks of most of the major advanced economies have continued to raise their benchmark rates.