The prices of some services have registered upward pressure derived from a pick-up in demand, while those of some goods have been pressured because of persistent effects on global supply chains.

In addition, there were increases in the prices of raw materials, mainly energy, and arithmetic effects associated with a low comparison base. 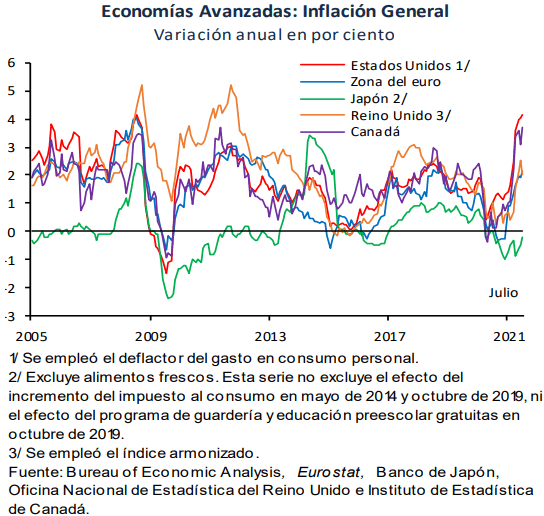 In general, inflation in most major advanced economies continued to rise, particularly in the United States, exceeding the targets of their central banks.

Since part of the rise in inflation has been concentrated in a relatively small number of categories, the use of alternative measures of inflation, such as truncated means, provides additional information on underlying inflationary pressures.

In the United States, inflation continued to post upward pressures during the reporting period.

For its part, the growth of the consumer price index increased significantly, from 2.6% in March to 5.4% in July, while the underlying component increased from 1.6% to 4.3% in July.

Increases in energy prices and the effects of a low annual comparison base have contributed to this, although these effects have begun to fade on the margin.

Inflation has also reflected increases in the prices of some goods, such as used vehicles, which have rebounded due to the effects on automobile production, derived from the shortage of semiconductors.

Additionally, there were increases in the prices of some services, such as transportation and accommodation, as restrictions on mobility decreased.

This is the result of an increase in energy prices and a lower rise in the prices of some services, as well as the effects associated with adjustments in the weights announced at the beginning of the year, 7 among other factors.

In the United Kingdom, headline inflation rose from a level of 0.7% in March to 2.0% in July, as a result of a rise in the prices of energy, some goods such as clothing and used cars, as well as services such as recreation , accommodation and restaurants.

For its part, the underlying measurement increased from 1.1% in March to 1.8% in July.

Meanwhile, in Canada, headline inflation increased from 2.2% in March to 3.7% in July, driven by arithmetic effects, especially in the price of gasoline, and by the increase in housing and accommodation prices.

For its part, the underlying measurement went from 0.9% in March to 2.8% in July.

In Japan, headline inflation increased slightly in the period covered by this Report, going from -0.3% in March to -0.2% in July, mainly reflecting an increase in energy inflation.