The Organization for Economic Cooperation and Development (OECD) forecasts that world GDP will grow 5.7% in 2021 and 4.5% in 2022.

In part, a strong rebound in Europe, the likelihood of additional fiscal support in the United States next year, and lower household savings will boost growth prospects in advanced economies.

Economic growth has already picked up this year, aided by strong political support, the deployment of effective vaccines, and the resumption of many economic activities.

Now world GDP has passed its pre-pandemic level, but production and employment gaps persist in many countries, particularly in emerging market and developing economies, where vaccination rates are low. 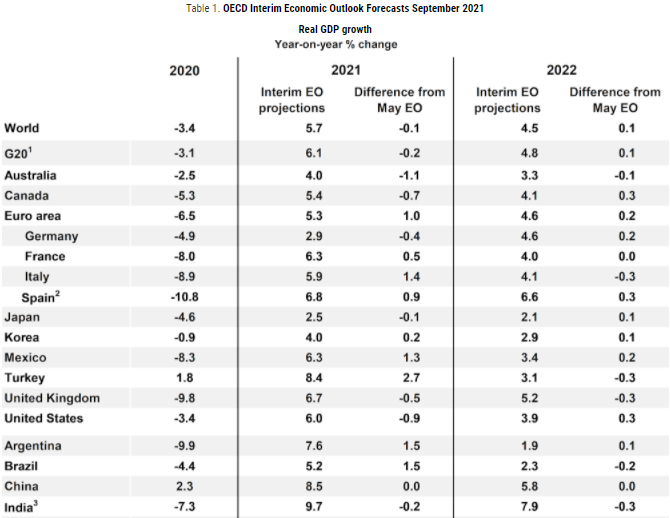 For one thing, according to the OECD, the economic impact of the Delta variant has been relatively mild in countries with high vaccination rates, but it has reduced short-term momentum elsewhere and increased pressures on supply chains. and global costs.

On the other hand, inflation has risen sharply in the United States, Canada, the United Kingdom, and some emerging market economies, but remains relatively low in many other advanced economies, especially in Europe and Asia.

Higher commodity prices and global shipping costs are currently adding about 1½ percentage point to annual G20 consumer price inflation, accounting for most of the spike in inflation over the past year.

Supply pressures should gradually fade, wage growth remains subdued and inflation expectations are still anchored, but short-term risks are on the upside.

But considerable uncertainty remains, from the OECD’s viewpoint.

Faster progress in vaccine deployment, or a sharper reduction in household savings would improve demand and reduce unemployment, but could also increase inflationary pressures in the short term.

Slow progress in launching the vaccine and the continued spread of new virus mutations would result in a weaker recovery and greater job losses.