World GDP grew by 1.5% (QoQ) in the first quarter of 2021, bringing global production back to its pre-pandemic level.

Before, world GDP expanded 1.7% from October to December 2020, according to the Monetary Authority of Singapore (MAS).

The infection lockdown cycle from the pandemic remained the key factor influencing the economic momentum.

Growth in some of the major advanced economies accelerated as movement restrictions eased, which in turn sustained activity in trade-led Asian economies, while the pace of growth in China normalized as that the economy emerged from its post-virus rebound. 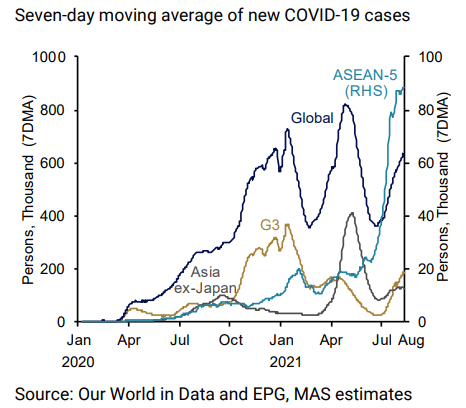 But the emergence of new variants of the virus fueled a new wave of global infection in the second quarter, with ASEAN-5 countries hit hardest towards the end of the quarter.

However, the transmission channel of infections to economic activity has weakened in some countries with higher vaccination rates, mainly in Europe and North America.

In contrast, vaccination rates in most Asian economies have lagged and many governments in the region have had to reaffirm movement restrictions.

This, in turn, has affected economic activity in regional economies, evidenced by the weaker performance of the Asian PMIs excluding Japan in recent months.

However, according to MAS, the drops in activity were less precipitous than those seen amid the first waves of infection last year.

This likely reflected the ability of governments, businesses and households to adapt to the circumstances of the pandemic, for example by adopting e-commerce solutions and remote work.