World food prices rose for the third month in a row in August, driven by generally firmer demand and a weaker US dollar, according to a report released by the Food and Agriculture Organization of the United Nations (FAO).

The FAO Food Price Index, which tracks the international prices of the most traded food products, reached an average of 96.1 points in August, that is, 2% more than the previous month and its highest level since February 2020.

The FAO Cereal Price Index climbed 1.9% from July and averaged 7% above the August 2019 value, with coarse grains leading the rise.

Sorghum prices rose 8.6% and were 33.4% above the level of a year ago, mainly as a result of strong import demand in China.

The FAO Sugar Price Index increased 6.7% from the previous month, due to the prospect of declining production as a result of unfavorable weather conditions in the European Union and Thailand, the second largest sugar exporter in the world, as well as from strong import demand in China.

Meanwhile, the FAO vegetable oil price index increased by 5.9%, driven by the rise in the values ​​of palm oil in particular, but also those of soybean, sunflower and rapeseed oils. The variations are mainly due to the prospects for declining production in the main palm oil producing countries, coupled with strong global demand for imports.

The FAO Dairy Price Index remained virtually unchanged since July, with prices for cheese and whole milk powder declining triggered by expectations of large seasonal exportable availabilities in Oceania, while prices of Butter rose as a result of the reduction in exportable availabilities in Europe as a result of the August heat wave, which caused a decrease in milk production.

For its part, the FAO meat price index also remained practically unchanged since July, although it is 8.9% below its level in August 2019, given that the effect of lower demand for meat imports of beef, poultry and sheep was offset by the sudden increase in demand for pork imports in China.

FAO lowered its forecast for world cereal production in 2020 by 25 million tonnes compared to the July forecast, mainly due to expectations of a decline in maize production in the United States of America.

However, despite this decrease, this result would continue to represent a historical maximum, 58 million tons higher than the 2019 production.

Forecasts indicate record maize harvests in Argentina and Brazil, while world sorghum production is forecast to grow 6% compared to last year. Global rice production in 2020 is also forecast to reach a new record of 509 million tonnes. 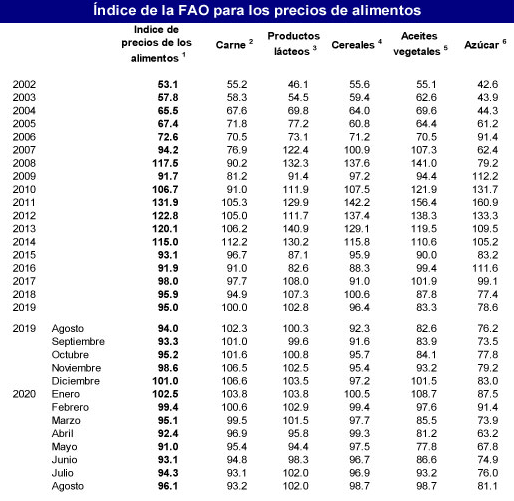 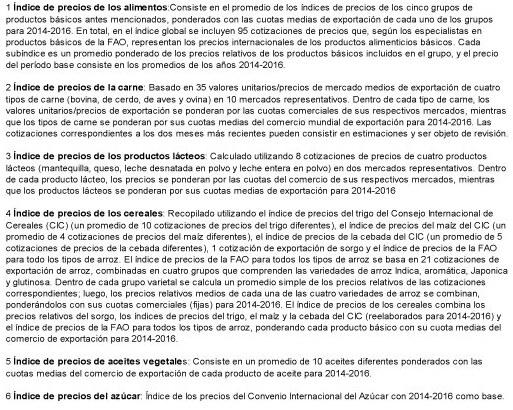 According to forecasts, world cereal stocks will rise 1.7% and will reach 895.5 million tons at the end of the 2021 seasons, which will translate into a ratio between world cereal stocks and their utilization of 31.8%, rate slightly lower than in July but still relatively high from a historical perspective.