The 2020 world economy contracted 3.7%, the most since World War II, according to AT Kearney estimates.

Meanwhile, world trade collapsed further last year, by about 9.5%, according to the World Bank.

On a third strand, direct investment flows, which historically correspond closely to fluctuations in world production and trade in goods and services, had already begun to decline before the pandemic.

Last year, Foreign Direct Investment (FDI) flows declined even more sharply, by a staggering 42%, according to data from the United Nations Conference on Trade and Development (UNCTAD).

For AT Kearney, the effects of the pandemic on direct investment flows are likely to be long-lasting.

The consultancy’s estimates suggest that the world could be contemplating a long-term recovery of several years for global FDI flows.

And, under less positive assumptions, it could take up to a decade for flows to reach their previous peak.

Given this dynamic, it is not surprising that investors are more cautious.

In the 2021 Foreign Direct Investment Confidence Index, respondents were less optimistic about the outlook for the world economy three years from now than since 2016.

The above suggests concern about how quickly the global economy will recover from Covid-19.

Specifically, only 57% expressed optimism about the world economy this year, which is much lower than the peak of 79% in 2014 and 72% just a year ago.

In the wake of the historic economic, social and political upheavals that accompanied the pandemic, vaccines have been developed and countries around the world are now rushing to vaccinate their inhabitants. 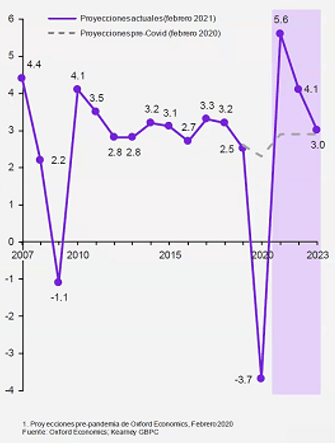 AT Kearney’s baseline projections suggest that the world economy will rebound this year to 5.6% growth and that, in the second quarter of 2021, world production will exceed its pre-pandemic level from the fourth quarter of 2019.

Yet even as conditions are beginning to improve, investors appear much more cautious in their outlook just 12 months after the pandemic turmoil began.