World demand for nickel would maintain an upward trend at least until 2023, the Australian government projected.

The government expects this demand to grow 7.3% at an annual rate in 2021 to reach 2.5 million tons.

This is due to the ban on raw nickel exports that has been in place since early 2020 and has led to a notable upturn in domestic refining.

In addition, according to the Australian government, Indonesia‘s stainless steel sector has expanded, with exports increasing by more than 400% year-on-year in the quarter ending March 2021, increasing the country’s refined nickel consumption. .

However, demand from the country’s burgeoning electric vehicle sector is estimated to boost refined nickel consumption to nearly 1.5 million tonnes by 2023.

In the March 2021 quarter, global nickel consumption increased 19% year-on-year as the industry rallied strongly after Covid-19, driven by strong demand from both stainless steel consumption and the battery market for electric vehicles.

Meanwhile, global nickel production is projected to see significant year-on-year increases in 2021, as production increases in Indonesia and as other operations negatively affected by the pandemic and other technical difficulties come back online.

Forecast nickel consumption by use 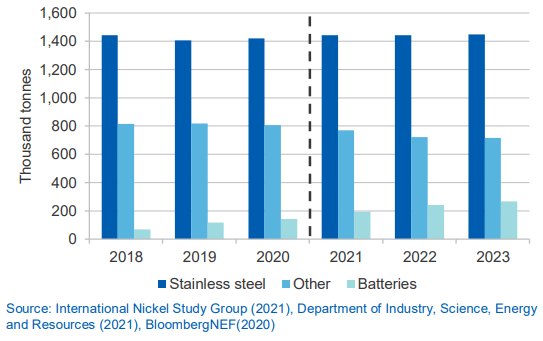 Despite lower-than-expected production in the March 2021 quarter, with a 2% quarter-on-quarter decrease, refined and mined nickel production is expected to increase in 2021.

Norilsk Nickel, the world’s largest producer of refined palladium and nickel, partially suspended operations at two of its main Arctic mines in February 2021, due to water inflows at one of the interconnected operations.