Thus, demand for March reached the highest level on record since the series began in 1990.

Monthly demand also increased, albeit at a slower pace than the previous month, with volumes increasing 0.4% in March from February 2021 levels.

Because comparisons between 2021 and 2020 monthly results are distorted by the extraordinary impact of Covid-19, unless otherwise noted, all comparisons to follow are to March 2019, which followed a normal demand pattern.

So this was a slower growth rate than the previous month, in which demand increased 9.2% compared to February 2019.

On this, a weaker performance of the Asia-Pacific and African airlines compared to February contributed to smoother growth in March.

Likewise, world capacity, measured in tons-kilometers of available cargo (ACTK), continued to recover in March, 5.6% more than the previous month. 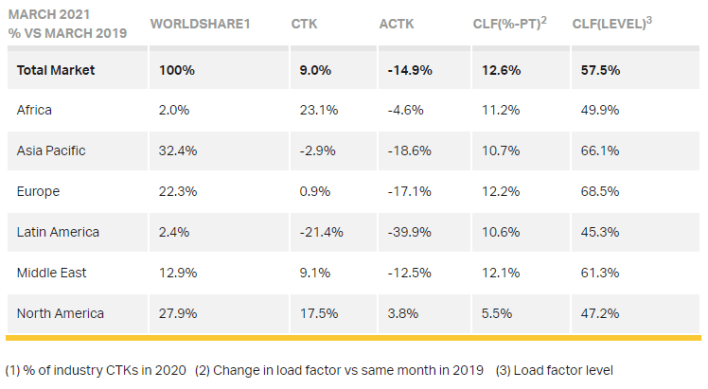 Despite this, capacity remains 11.7% below pre-Covid-19 levels (March 2019) due to the ongoing grounding of passenger aircraft.

Until now, airlines continue to use dedicated freighters to fill the lack of available cargo capacity.

The international capacity of dedicated freighters increased 20.6% in March 2021 compared to the same month of 2019 and the lower cargo capacity decreased by 38.4 percent.