The Mexican peso has suffered less downward pressure over the past year than other emerging market currencies.

Overall, according to the International Monetary Fund (IMF), the relatively high interest rate differential between Mexico and the United States has made it more attractive to hold peso assets, which has helped contain upside risks to inflation.

In addition, the peso has been supported by strong remittances, a history of fiscal discipline and some inflows linked to the “offshoring” of productive capacity. 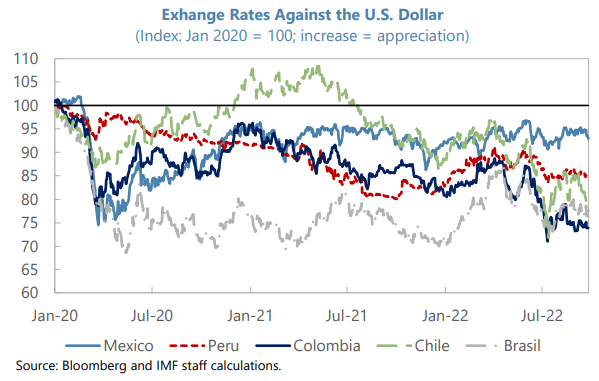 In the event of a balance of payments weakening, the peso depreciation should be allowed to act as a buffer.

In general, the standard financial frictions that underpin concerns about depreciation are not relevant in the case of Mexico.

In particular, the IMF notes that peso foreign exchange markets are deep and liquid, and even during the 2020 turmoil there were below-average increases in the uncovered interest parity premium (UIP) and bid-ask spreads.

Balance sheet currency mismatches are contained. Therefore, the IMF expects the economy and the financial sector to remain resilient if downward pressures on the peso materialize.

However, in the event of a large shock leading to a significant depreciation, an interest rate hike may be necessary to counteract the pass-through of inflation.

If such a shock were to trigger market illiquidity and a sharp increase in bid-ask spreads, temporary intervention in the foreign exchange market could be considered, from the IMF’s perspective.

So far, Banxico has taken a proactive approach to dealing with widening inflation.

Since June 2021, successive and gradual increases in the benchmark rate brought the ex ante real policy rate (i.e., the nominal rate adjusted for one-year-ahead inflation expectations) to a moderately restrictive level in September 2022, at around 4 percent.

This has been an appropriately calibrated response to upside surprises in inflation and sequential delays in returning to the inflation target.