Whirlpool, AT&T and Mabe were among Elektra’s top suppliers in 2020.

In addition, it is the largest provider of short-term non-bank loans in the United States, aimed at the country’s middle class. 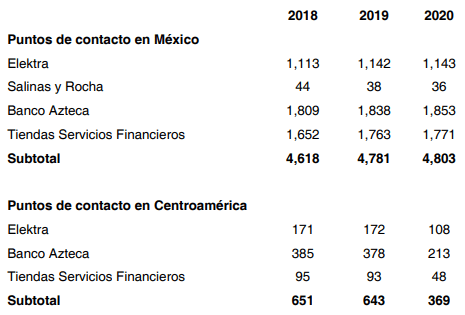 Together, the merchandise supplied by these companies represented 62% of Grupo Elektra’s consolidated net purchases of goods from external suppliers for the nine-month period ended September 30, 2020.

Grupo Elektra’s business operations may be interrupted if it cannot ensure an adequate supply of merchandise at reasonable prices.

The future success of this company depends largely on its ability to secure a sufficient volume of merchandise for its stores at an attractive cost.

Historically, Grupo Elektra has been able to acquire high-quality merchandise at low cost, but such merchandise may not be available in the future or in sufficient quantities to satisfy the demand of Grupo Elektra’s customers.

The orderly operation of the receipt and distribution of Grupo Elektra inventory requires effective management of its distribution centers and compliance with the company’s logistics guidelines.

Whirlpool and Mabe are two of the main appliance manufacturers in Mexico.