The Comprehensive and Progressive Treaty of Trans-Pacific Partnership (CPTPP) was signed by Australia, Brunei Darussalam, Canada, Chile, Japan, Malaysia, Mexico, New Zealand, Peru, Singapore and Vietnam on March 8 of 2018. How many RTAs do its members have?

Thus, the CPTPP entered into force on December 30, 2018 for Australia, Canada, Japan, Mexico, New Zealand and Singapore and on January 14, 2019 for Vietnam.

Other signatories (Brunei Darussalam, Chile and Malaysia) have not yet ratified the CPTPP, so it is not yet in force between them and the other Parties.

For its part, Peru will put this treaty into force on September 19.

All CPTPP Parties are party to various RTAs. Singapore and Mexico are parties to more than 20 RTAs notified to the WTO.

The other Parties have notified between 12 (New Zealand) and 18 (Japan) RTAs.

In the WTO, an RTA is understood to be any reciprocal trade agreement between two or more parties, which do not have to belong to the same region. 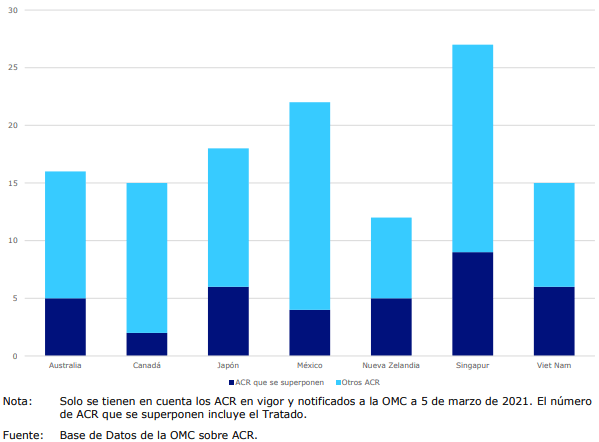 Also, the number of overlapping RTAs ranges from 2 for Canada to 9 for Singapore.

The principle of non-discrimination is fundamental in the WTO. Members have generally agreed not to favor one trading partner over another.