Customs officials identified and recovered 9,399 items in 2019, according to data from the World Customs Organization (WCO).

According to the WCO, this drop was mainly due to a particularly large seizure of 10,000 coins in 2018.

As in 2018, AOM statistics show that a handful of cases contributed to the majority of the recovered articles.

The Russian Federation reported by far the largest number of cases, with 133 reported cases representing more than half (58.5%) of the global total.

This number was almost identical to the 132 cases reported by the Russian Federation in 2018.

After not reporting any cases in 2018, Cuba and Chile reported seven cases each, tying for fourth most in 2019.

Overall, 2019 was a challenging and rewarding year for the global law enforcement community and its partners. Many important investigations were closed and new cases were started.

The WCO highlighted that some of these investigations took more than 10 years, but their results are nevertheless very revealing about the complexity of the fight against the illicit traffic of cultural property, especially when compared with other prohibited and restricted products that are most common in customs, such as drugs, weapons, tobacco and cigarettes and others related to Intellectual Property Rights.

In line with the previous year, some customs administrations preferred to report a large amount of data consisting of the number of cases and objects seized without providing details about the cases.

While this is a positive development as this information was not received through the WCO Customs Control Network (CEN), it is not part of the structural analysis presented below.

General statistics for information submitted outside of CEN are presented in the Member Highlights portion of this section.

The Organization continues to work with Members to promote the collection and sharing of data on seizures in a way that facilitates analytical perspectives on this type of illicit trade.

In parallel, the OMA continued to deliver its unique PITCH training in different regions. In particular, the Control Units of Airports and Ports of Cuba received PITCH training in February 2019 within the framework of the WCOUNODC Container Control Program. 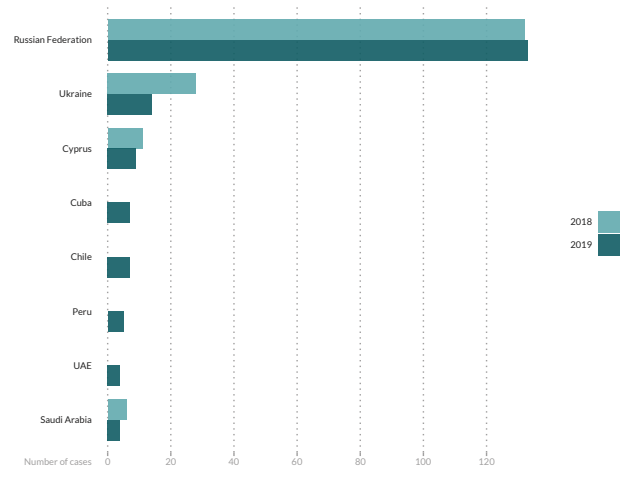 In 2019, CEN registered 227 cases related to the trafficking of cultural property, made up of 271 seizures, from 34 countries.

In fact, 19 new countries reported cases in 2019 compared to 2018, including Chile, Peru, Afghanistan and Cuba.