The war in Ukraine has caused immediate disruptions to world trade and is likely to have long-term effects on its structure as well, the United Nations Conference on Trade and Development (UNCTAD) said.

In the short term, the effects of prices and shortages are spreading to economies that are more dependent on Ukrainian and Russian exports, especially of basic products, ranging from oil to minerals and food.

In an update to its Trade and Development report released on March 24, UNCTAD says preliminary data points to special vulnerabilities in Africa. 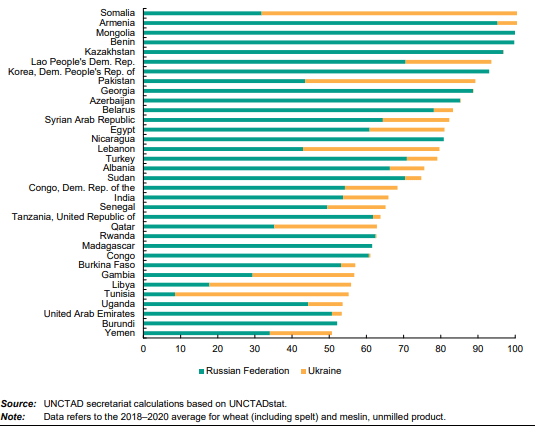 The dependence of African and least developed countries on wheat imports from the Russian Federation and Ukraine is, in many cases, much higher.

In the medium term, according to UNCTAD, fears of ongoing geopolitical instability are likely to lead to the reorganization of value chains to reduce reliance on imports from countries that may be subject to sanctions.

As disruptions to value chains in the wake of the pandemic ease, calls have emerged for greater trade integration across the Atlantic and South Pacific.

Some strategically important production processes, such as military equipment, are also likely to be “reshored.”

In 2021, global trade in goods and services rebounded remarkably, reaching a record $28.5 trillion, up 13% from its pre-pandemic peak.

Higher merchandise trade volumes, as demand has shifted sharply from services (travel, leisure and entertainment) to durable goods since March 2020, and higher unit prices for some key commodities supported this result.

Discounting the price effect, this segment of world trade is estimated to have grown 9% in 2021 in real terms, after being nearly flat in 2019 and contracting more than 5% in 2020, putting it about 3% higher than its pre-pandemic peak.

In general, the recovery in merchandise trade was broad-based, both in terms of products and exporting economies.

Asian exporters led the recovery in terms of volumes as the region is biased towards manufactured goods such as cars, electronics, furniture and machinery.

In turn, large commodity exporters benefited from high export prices, although their volumes have changed little from pre-pandemic levels.