Walmart de México y Centroamérica (Walmex) reported that sales of Member’s Mark products increased their share by 290 basis points in the third quarter of 2022, reaching a sales share of close to 20 percent.

In their own words, given the current environment, Walmex brands continue to be a great vehicle to help families afford a complete basket, and their members are appreciating the quality, value and convenience of Member’s Mark products. 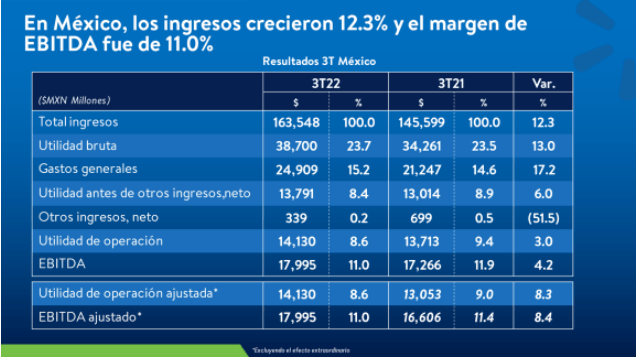 The company also launches new gourmet products, which have been well received by its members, such as tequila, red wine, pan de muerto, gourmet rosca and Pralinas chocolates, all under its Member’s Mark brand.

On the other hand, the commercial names of the Walmart, Walmart Express, Walmart Pass and Sam’s Club business formats, as well as the various proprietary brands such as Great Value, Equate, Mainstays, Members Mark and Carrito Wal-Mart, etc., are registered trademarks owned by WALMART APOLLO.

These trademarks are used by the operating companies under license and/or sublicense agreements with indefinite duration.

Trademarks owned by third parties are also used, for which license agreements have been signed, in order to guarantee their legal use and comply with applicable and current legislation.

Walmart de México y Centroamérica is one of the most important retail chains in the region. As of December 31, 2021, it operated 3,620 units in six countries (Costa Rica, Guatemala, Honduras, El Salvador, Mexico, and Nicaragua), through self-service stores, membership price clubs, and omnichannel sales.

At the same time, 88% of people live within 10 minutes of Walmex stores in the five main cities in Mexico.