Vitro is a holding and operating company whose subsidiaries are dedicated to serving various markets, among which are flat glass for use in the construction and automotive industries; as well as glass containers for the cosmetic, fragrance, pharmaceutical and liquor markets.

The competition of these producers consists mainly of price, service and quality.

According to the company itself, the segment has made use of its competitive advantages to supply a variety of value-added products, including special glass containers for perfumery, cosmetics, and pharmaceuticals, and increasing experience and productive flexibility, allowing it accordingly , maintain a solid market position. 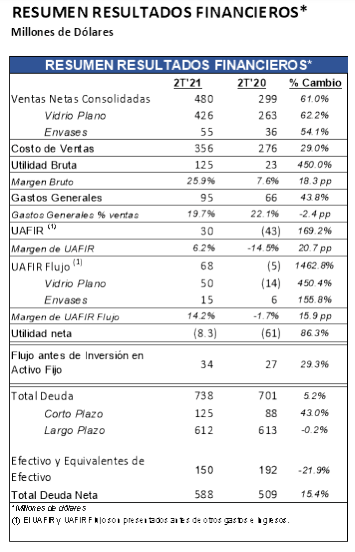 Vitro’s consolidated net sales for the second quarter of 2021 increased 61.0% year over year, to 480 million dollars, mainly due to higher demand, the effect of economic reactivation and opening in the Architectural and Automotive segment in the United States, Europe and Mexico due to less restriction due to pandemic.

During the first and second quarters of 2020, the company was forced to suspend operations in the Automotive segment as a result of the stoppage of production of cars and light vehicles, and to significantly reduce the operations of the Architectural business, since in Mexico the construction segment as a non-essential activity. This decree was reversed during the third quarter of 2020.