In January 2021, Vietnam was a signatory to 15 regional trade agreements (RTA), six of which (including the Comprehensive and Progressive Treaty of Trans-Pacific Partnership –CPTPP– and the Regional Comprehensive Economic Association -RCEP, for its acronym in English-) they were signed in the last eight years.

Since 2013, Vietnam, as an individual signatory, has signed six RTAs and concluded negotiations for a free trade agreement, according to a report from the World Trade Organization (WTO).

In addition, as a member of ASEAN, Vietnam signed new RTAs with third parties, including India and Hong Kong, China.

Today, Vietnam is conducting RTA negotiations with the European Free Trade Association and with Israel. 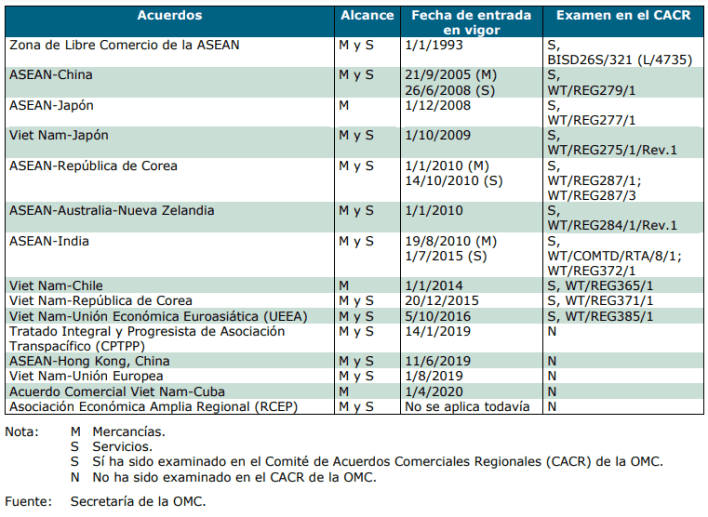 Prior to its accession to the WTO, Vietnam had concluded bilateral trade agreements with 40 partners.

In particular, Vietnam has been a member of ASEAN since July 1995; considers ASEAN to be the cornerstone of its international integration.

Overall, ASEAN developed the framework for the ASEAN Free Trade Area, which covers trade in goods and services under specific agreements.

Under the ASEAN Trade in Goods Agreement (ATIGA), as of January 1, 2018, nearly 100% of goods originating from ASEAN members entered Vietnam duty-free.

Likewise, in 2019 the Information Technology Agreement was concluded within the framework of ATIGA, which entered into force on January 1, 2020.

The ATIGA also contains provisions on the elimination of non-tariff barriers and the facilitation of trade.

To conclude, the RCEP is an agreement between 15 parties, including 10 ASEAN members and five other countries in the region.

Vietnam concluded the RCEP negotiations in November 2019 and signed the agreement on November 15, 2020.

The RCEP covers a wide variety of areas, including trade in goods, trade in services and investment, and intellectual property.