It also withheld countervailing duties for those same imports from China.

On the basis of the record developed in the five-year reviews at issue, the USITC concluded that the revocation of the countervailing duty order on certain magnesia coal bricks from China and the anti-dumping duty orders on certain magnesia coal bricks from China China and Mexico would likely result in the continuation or recurrence of material injury to an industry in the United States within a reasonably foreseeable time.

In five-year reviews, the USITC determines whether the revocation of the anti-dumping or countervailing duty order is likely to result in the continuation or recurrence of material injury to the US industry. 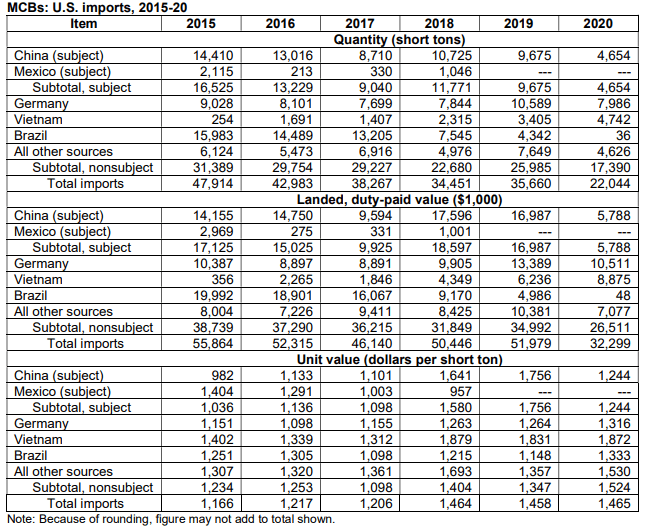 The Commission initiated the original investigations on July 29, 2009, based on petitions filed by Resco Products, Inc., a US producer of MCB.

MCBs are a refractory product that consists primarily of a combination of magnesia and carbon.

MCBs are considered the most durable firebrick on the market for furnaces and ladle liners used in the production of steel and iron.

Above all, these products are used by the steel industry to coat the lower side walls, the upper side walls, the slag lines and the roofs of ladle and ladle metallurgy furnaces involved in production and refining where there is direct contact with both the molten metal as with molten slag.

In addition to the United States, China and Mexico, MCBs are produced in Europe and Brazil.

RHI Magnesita GmbH, which claims to be the world’s leading manufacturer and supplier of heat resistant refractory products, operates MCB production plants in Veitsch and Carinthia in Austria; Germany; and Brazil.

In 2017, RHI Magnesita agreed in September 2017 to sell its MCB operations in Oberhausen, Germany to Intocast Actiengesellshaft FeurefestProdukte Gieβhilfsmittal as a divestment requirement for European Economic Area approval of the corporate merger of RHI AG and Magnesita Refatarios SA, completed in November of 2017.