The United States increased its cauliflower imports 25% in 2019, to $ 80 million, at an annual rate.

In recent years, on the US market, fresh cauliflower has experienced a revival in popularity that was lost after the heyday of cauliflower puree dishes in the early 2010s.

It is an annual plant that reproduces by seeds and is found at its best between the months of September and January in the northern hemisphere, although it is available throughout the year.

U.S. cauliflower imports doubled in the past three years, from $ 40 million in 2016, according to data from the Department of Agriculture.

In 2019, availability per capita in the United States rose 21%, to a record 3.0 pounds, as both domestic production (8%) and imports increased. 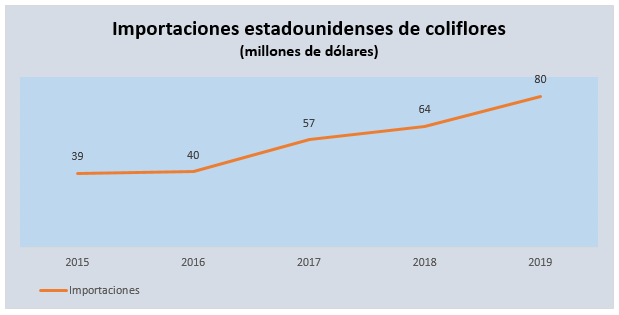 Fresh cauliflower imports increased 34% in 2019, with an increase in volume from both Mexico (accounting for 74% of imports) and Canada.

Cauliflower imports and other vegetables

This was the sixth year in a row that import volume grew, and in 2020, the United States could become a net importer of fresh cauliflower for the first time.

In 2019, total U.S. per capita vegetable use (availability) increased 2% to 409 pounds. With the exception of pulse crops, all major categories exhibited increases.

Legume crop availability fell 23%, as pinto and white bean production declined; while the production of chickpeas and lentils was drastically reduced in a reduced area.

Recovering from a 6% drop in 2018, the availability of fresh vegetables on the market (including potatoes) increased 4% to 198 pounds in 2019.

In fact, 16 of the top 25 vegetables in the fresh market posted availability gains driven largely by increases in spinach, cauliflower, cabbage, carrots, green beans, and potatoes.

The peso gains 25 cents against the dollar