Globally, according to the USDA, world wheat prices for most major exporters have eased over the past month as markets have settled somewhat following price spikes following the Russian invasion of Ukraine. 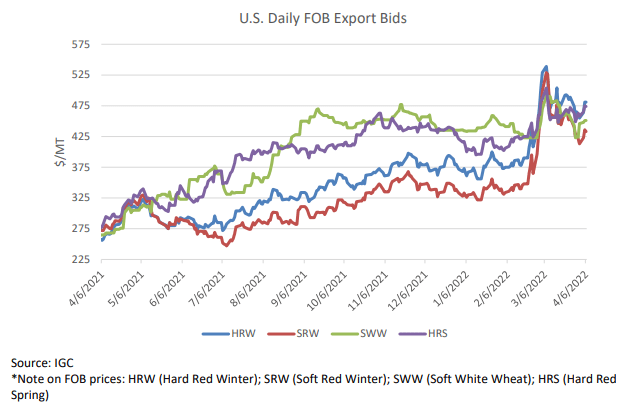 At the same time, prices in Russia fell $10 a tonne amid predominantly subdued conditions for winter crops and continued ability to export from the Black Sea.

In contrast to declines elsewhere, Australian quotes rose $36 a tonne on strong international demand, particularly from markets in sub-Saharan Africa and Southeast Asia.

World wheat production increased last April mainly due to larger crops in Argentina and Pakistan, slightly offset by reductions in the European Union.

According to the USDA, global consumption rose in April with more feed use and waste in Ukraine; increased food, seed and industrial use in India and Pakistan.

Ending stocks were revised down in April mainly due to drawdowns in India and are down 4% globally from a year earlier.

Imports are forecast lower in April with reductions for Egypt, the European Union, Iraq and Turkey.

Conversely, exports have decreased for the European Union and Ukraine, but partially offset by increases for Brazil and Russia.

The US seasonal average farm price rose 10 cents a bushel to $7.60.