Natural gas exports through pipelines from the United States to Mexico averaged 5.3 Bcf / d in the first quarter of 2020, an increase of 9% compared to the same period in 2019.

Exports to Mexico should continue to increase as more natural gas power plants come online in Mexico and more pipeline infrastructure is built within Mexico, according to forecasts by the United States Energy Information Administration (EIA).

Exports of natural gas from the United States to Mexico by pipeline have increased as more infrastructure has been built to transport natural gas.

With this, Mexico returned to position itself as the largest importer of this product from the United States, with a 20.1% share and displacing Japan.

According to data from the World Trade Organization (WTO), the United States is the world’s largest consumer and producer of natural gas.

The EIA projects that these exports will increase with the completion of the southernmost segment of the Wahalajara system, the Villa de Reyes-Aguascalientes-Guadalajara (VAG) pipeline.

The VAG began operating in June 2020, connecting new demand markets in Mexico with gas pipeline exports from the United States. 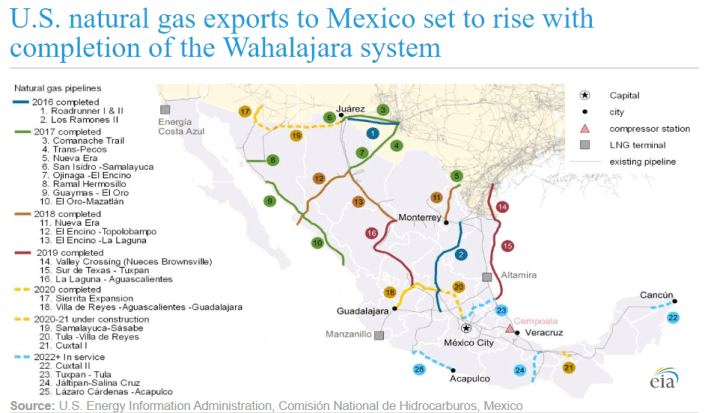 The Wahalajara system is a group of new pipelines connecting the Waha center in west Texas, a major supply center for natural gas producers in the Permian Basin, to Guadalajara and other population centers in the west-central of Mexico.

In addition, the Wahalajara system provides US natural gas to meet the growing demand from Mexico’s industrial and electrical energy sectors.