The top 10 markets in the index were largely unchanged from 2021, except for China, which rose from 12th to 10th place.

Developed markets held 21 of the 25 positions in the Index, including the top nine. 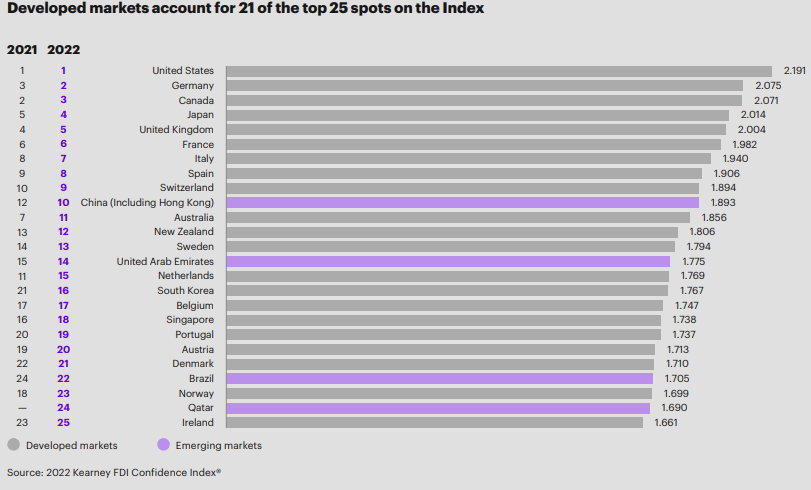 These markets continue to show their strength in the survey during periods of crisis, representing more security and stability for business leaders whose strategies and results have been affected by the pandemic.

China, the United Arab Emirates, Brazil and Qatar are the only emerging markets to feature on this year’s list.

China moved up two places, perhaps a reflection of the country’s strong economic recovery in 2021 and continued strong growth projections for the next three years.

The United Arab Emirates moved up one position from 15th to 14th, and Brazil moved up two positions from 24th to 22nd.

Notably, Qatar makes its debut at position 24, marking the first time in the history of the survey that Qatar has appeared in the Index.

The survey was carried out in the field in January, about a month before Russian troops entered Ukraine.

While these events have undoubtedly changed the geopolitical and macroeconomic outlook, the results reveal both key information and blind spots for investors just weeks before the conflict erupted. The results suggest that optimism among business leaders was recovering from last year’s levels.

More than three-quarters (76%) of companies said they planned to increase their FDI in the next three years, up from 67% a year ago.

Additionally, 83% cited FDI as becoming increasingly important to corporate profitability and competitiveness over the next three years, including 50% of business leaders in the Americas region who said they believed FDI would become significantly more important.

Similarly, respondents felt the outlook for the global economy had improved, with 63% saying they were more optimistic than pessimistic, up from 57% last year.