Total industrial production in the United States increased 0.7% in April compared to the immediately previous month, the Federal Reserve reported.

After registering a 3.5% month-on-month drop in February of the current year, this indicator grew 2.4% in March.

Above all, US industrial production was driven by the energy sector, which grew 4.6 percent in April.

For its part, manufacturing production increased 0.4%, due to the return to operation of plants that were damaged by the severe weather in February in the south-central region of the country and had remained offline in March.

However, factory output was affected by a drop in motor vehicle assemblies that was mainly due to a shortage of semiconductors.

The mining and utilities indices increased 0.7 and 2.6%, respectively.

Most market groups posted gains in April, the main exceptions being those related to motor vehicles and spare parts. 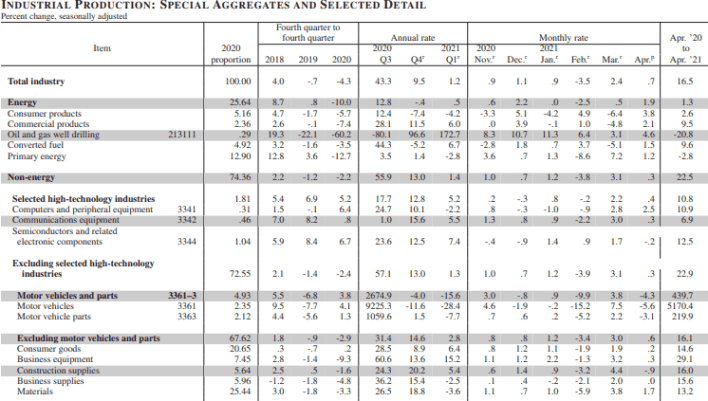 Among the other market groups, chemical materials and consumer energy products posted strong gains, 6.7% and 3.8%, in that order.

Rates for all three sectors remained below their long-term averages.

In 2019, manufacturing companies directly employed approximately 12.5 million full-time employees in the United States and indirectly supported millions of additional jobs in other industries.

Also, according to an analysis by the US Congress, manufacturers funded more than 62% of US research and industrial development (R&D), providing a foundation for technological innovation and continued US technology leadership.

Wages and salaries per full-time equivalent employee in manufacturing were $ 72,735 in 2019, compared to $ 66,778 for employees across all industries.

With respect to national defense, the United States relies heavily on its manufacturing base to produce military weapons, airplanes, land vehicles, ships, and other equipment.