The United States dominates exports of pears to Mexico, especially with the supply of the states of Oregon and Washington, according to statistics from the Department of Agriculture (USDA).

The United States has a market share of total Mexican pear imports that is usually around 90 percent. Argentina, Chile and China supply the rest.

In turn, the USDA forecast is that Mexican pear exports will add up to 60 tons in the same period.

The export season for US Anjou pears is from September to July, and for Bartlett pears is from August to February, with supplies available year-round due to cold storage facilities.

Mexico is a price sensitive fruit market, and the consumption of pears is significantly dependent on the price and availability of other fruits such as apples.

US pears are gaining more visibility and space in supermarkets as marketing campaigns and favorable prices entice consumers to buy more.

Sales are mainly concentrated in the supermarket and hypermarket sector, which typically accounts for 75% of all pear retail sales.

Demand is met almost entirely by imports from the United States, since domestic production is small and of low quality.

US pears are preferred in Mexico for their quality, perceived value for money, and year-round availability due to Mexico’s cold storage infrastructure.

According to the USDA, supermarkets generally prefer US Anjou pears because they don’t bruise easily, have optimal ripening times, and transit overland. 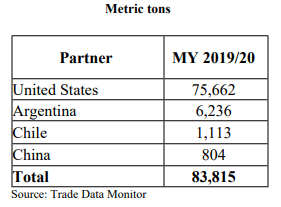 The Bosc, Bartlett and Red Anjou varieties are also available. The annual consumption of pears per capita in Mexico is 0.8 kilograms.