The value of exports of nuts (especially almonds, pistachios and walnuts) from the United States to the world was $ 9.1 billion, an increase of 7% compared to 2018.

The three main markets, which represent 51% of sales, were the European Union (EU), India and Canada, with 3.1 billion dollars, 823 million and 696 million, respectively, according to a report by the Department of Agriculture (USDA).

While tree nut exports to Hong Kong, Japan and Mexico decreased by 34, 4 and 7%, in that order during 2019, this was more than offset by increases in sales to the EU, India and China.

Although almonds, pistachios and walnuts recorded reduced production due to lower yields in 2019, external sales of almonds and pistachios increased compared to the previous year.

US foreign sales continue to dominate world markets for almonds, pistachios and walnuts despite disruptions due to restrictive phytosanitary requirements and tariffs.

Sales to Hong Kong and Vietnam fell due to the tightening of China’s import controls on the resale of US nuts.

Strong demand pushed exports to China up to $ 278 million in 2019, despite retaliatory tariffs of 40 percent. 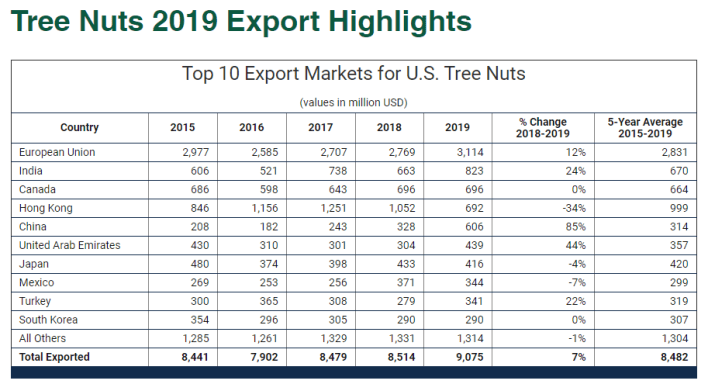 Foreign sales to India recovered 24%, or $ 160 million in 2019 (a record year), despite the implementation of retaliatory tariffs on almonds and walnuts.

External sales of nuts to the EU increased 12% in part due to the pre-departure inspection programs implemented.