Alfalfa exports from the United States rose at a year-on-year rate of 16.3% in the first quarter, to $ 216 million.

Already throughout the year of 2019 these sales had registered a historical maximum, totaling 866 million dollars, according to data from the Census Office.

Alfalfa is indigenous to the Middle East, where it is considered a “non-latent” plant, which means it grows throughout the year.

Alfalfa varieties “dormant” have adapted to cold climates by remaining dormant during periods when frost or snow conditions would kill them. 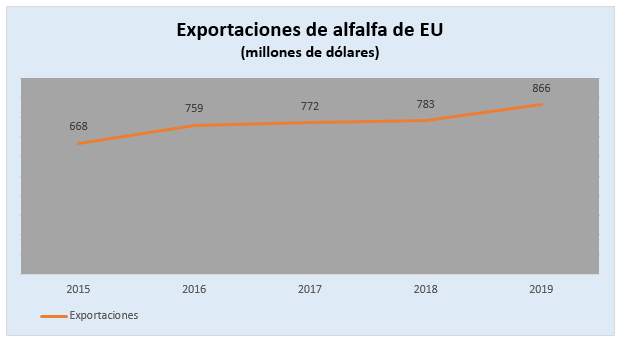 Alfalfa seed is primarily used for growing alfalfa hay, which is grown worldwide as “fodder” for livestock, including dairy and beef cattle, horses and sheep.

The alfalfa industry (and hence the alfalfa seed industry) is highly dependent on the dairy industry, which is the largest consumer of alfalfa hay.

As markets around the world continue to expand to a more westernized diet with high protein consumption, the demands for alfalfa production worldwide should continue to increase, according to companies in the sector.

USA Truck operates 1,990 tractor trucks in the US, Mexico and Canada