Agricultural exports from the United States to China grew with China’s economic recovery from COVID-19.

In particular, the recovery generated strong demand for US agricultural products such as cotton, soybeans, wheat and corn.

In 2020, agricultural exports from the United States to China totaled $ 26.4 billion, which is $ 12.6 billion more than in 2019, according to data from the Department of Agriculture (USDA). 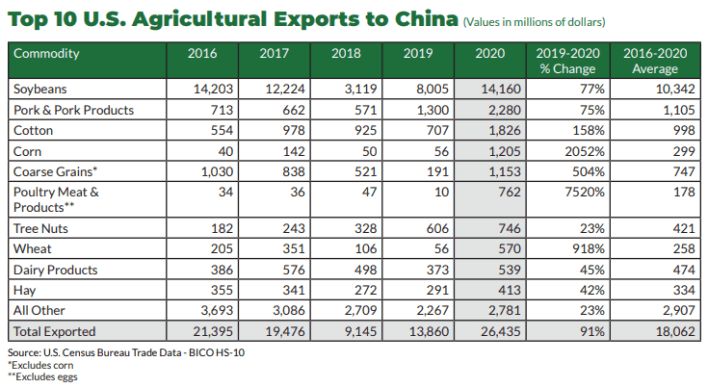 China was the largest market for U.S. agricultural exports, a position it last held in 2016.

Brazil (22% market share) and the United States (15%) were the main suppliers of agricultural products to China, followed by the European Union, with 14%.

Always according to USDA statistics, China established in 2020 a process for importers to seek exclusions for retaliatory Section 301 tariffs on US products, including agricultural products.

External sales of the top 10 commodity groups increased in 2020, with the biggest gains for soybeans, corn, and cotton, increasing $ 6.2 billion, $ 1.2 billion, and $ 1.1 billion, respectively.

In addition, US exports of pork and pork products, coarse grains (without corn), and meat and poultry products (without eggs) increased by 980 million, 962 million, and 752 million, respectively.

While exports of most commodity groups increased, some, including processed vegetables, hides and skins, and wine and beer, fell 29 million, 23 million and 18 million, respectively.