Around 30% of Uruguay‘s exports of products are made up of industrialized goods for generic use, according to a report by ECLAC.

At the same time, most of these goods are agricultural-based, although there are also some based on imported chemical-based inputs.

This category, dominated by cellulose, also includes traditional products such as wool tops, (semi) tanned leathers and newer ones such as sawn wood or malted barley or rubber and plastics in primary forms. 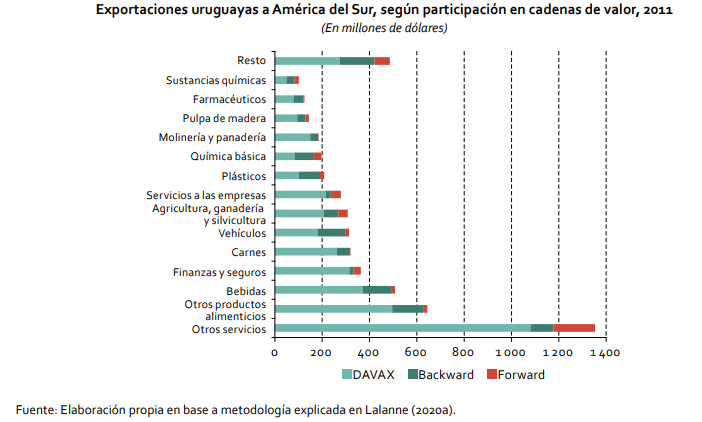 Except for barley, rubber and plastic, these products generally have an extra-regional insertion and do not face high tariffs at destination, while their low use of imported inputs means that in general they do not have difficulties in complying with the rules of origin, in the case of exporting to preferential markets.

This segment has a very high presence of foreign capital and has tended to be concentrated in few companies that account for large volumes.

For ECLAC, the evidence indicates a fairly neutral tax policy in this segment.

The most innovative segment is made up of intermediate goods for specific use, which account for 15% of Uruguay’s exports and maintain a stable share.

This category has been very dynamic global trade. In Uruguay, it currently consists of concentrates for beverages, medicines, auto parts, finished leathers, plastics and chemical products.

In part it has a regional insertion and in general it requires flexible rules of origin.

It is a group completely dominated by few companies with foreign capital (some regional ones), which actively use incentive instruments, whether they are tax returns, production in free zones or direct subsidies. A part of this segment has the usual risks of benefiting from high protection in the target markets.

Additionally, the chain trade in Uruguay is dominated by sectors that do not behave as backward or as short when they do not participate in chains.

The analysis based on trade data classified according to Economic Use (BEC5) gives a complementary view to the previous one.

Despite being a country relatively oriented towards participating Backward, during the 21st century Uruguay increased its Forward position as a supplier of inputs to international markets.

According to the same analysis by ECLAC, this is verified in an increase in the importance of the sale of non-industrialized intermediates and a reduction in the participation in final manufacturing.

Additionally, within the segments of processed intermediate goods, there were changes in composition and a tendency to reduce the use of imported inputs.