The United Kingdom is analyzing adhering to the Treaty between Mexico, the United States and Canada (USMCA), according to sources consulted by the newspaper The Telegraph.

As a result of a demand from former US President Donald Trump, the T-MEC entered into force on July 1, 2020, modernizing and replacing the North American Free Trade Agreement (NAFTA), which began in January 1994.

The English newspaper said that the weighting carried out by the government of Prime Minister Boris Johnson implies that US President Joe Biden will not initiate negotiations for a bilateral free trade agreement between the United States and the United Kingdom.

In his recent visit to the United States, Johnson declared that he does not see any possibility of a free trade agreement before 2024, reported journalist Kitty Donaldson.

This treaty maintains zero tariffs among the three countries that were in force under NAFTA.

In addition, the USMCA updates NAFTA in a number of key areas, including expanding US access The T-MEC, made up of 34 chapters and 12 parallel letters, retains most of NAFTA’s market opening measures and other measures, while making notable changes to the rules of origin for automobiles, dispute resolution provisions, public procurement, investment and protection of intellectual property rights. 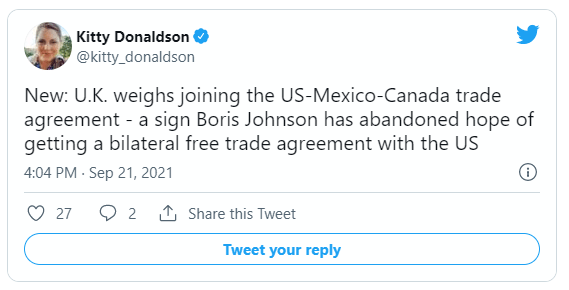 It also modernizes the provisions in services, labor and the environment. In addition, new business issues are addressed, such as digital commerce, state-owned companies, anti-corruption and currency misalignment.

On the other hand, the USMCA introduced additional requirements to determine the country of origin, which had not existed in previous US free trade agreements.

In addition to increasing the regional value content requirement from a range of 60 to 62.5% in NAFTA to one of 70 to 75% in the USMCA, the new agreement introduced requirements for steel and aluminum content, and value content of labor, which requires that between 40 and 45% of vehicles and parts be produced by workers with wages of at least $ 16 an hour.