Both productivity and real wage growth were high in the United States in 2020, but have declined since then, according to a U.S. congressional analysis.

In particular, both real wage growth and productivity growth have been consistently negative in 2022.

Although nominal wage increases have been above trend in 2022, they have been below inflation, leading to a decline in real wages. 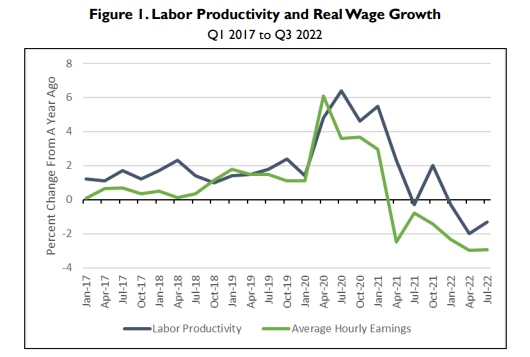 However, the extent to which this trend may continue is uncertain.

There is some evidence to suggest that labor productivity rises during recessions as workers increase their output, something that would likely reverse during an expansion.

During the height of the pandemic, employment declined rapidly and then increased at a slower pace.

Some of the factors that temporarily slowed employment growth had to do with the nature of the public health crisis.

During this time, some workers had to work harder, longer, or with fewer co-workers, which resulted in increased productivity.

Some economists have also argued that the increase in productivity at the height of the pandemic was the result of changes in the composition of the labor force that reversed when employment recovered.

As the economy has recovered and added jobs at a relatively rapid pace, productivity growth would normally decline, all else equal: more workers means that each worker can work less intensively (less capital per worker).

However, some factors affecting business operations and labor have proven to be more enduring and could result in a downward shift in productivity growth trends.

Among these factors are supply chain problems and health factors.

The same analysis indicates that the pandemic also led to innovations in the way individuals work, although it is not yet clear whether these changes (such as the widespread adoption of videoconferencing technology and the rise of telecommuting) will affect longer-term productivity trends positively, negatively, or not at all.