An analysis released by the Economic Commission for Latin America and the Caribbean (ECLAC) shows the outlook for the U.S. economy in 2023.

Despite the increased strength of the U.S. economy in the second half of the year, market analysts expect growth to falter in 2023 as the effects of rapidly rising interest rates, which tend to have a delayed impact on the economy, take hold.

However, there are large differences in forecasts as to when growth will begin to decline and by how much.

Overall, about half of the forecast sample used in the analysis expects a contraction in the second and third quarters of 2023, with a return to growth in the fourth quarter.

On an annual basis, the median market projections point to growth of 1.7% in 2022, and 0.5% in 2023, with most of the projections made in November and December.

Economic projections released by the Federal Reserve following its December rate-setting meeting on December 14, 2022, show that officials expect their rate hikes to slow the economy over the next year and push up the unemployment rate.

The new projections show that economic growth in 2023 has been downgraded to 0.5% from a forecast of 1.2% in September and that the unemployment rate is expected to rise to 4.6% in 2023 from 3.7% in November.

Historically, such a large increase in unemployment in that time frame has coincided with a recession. 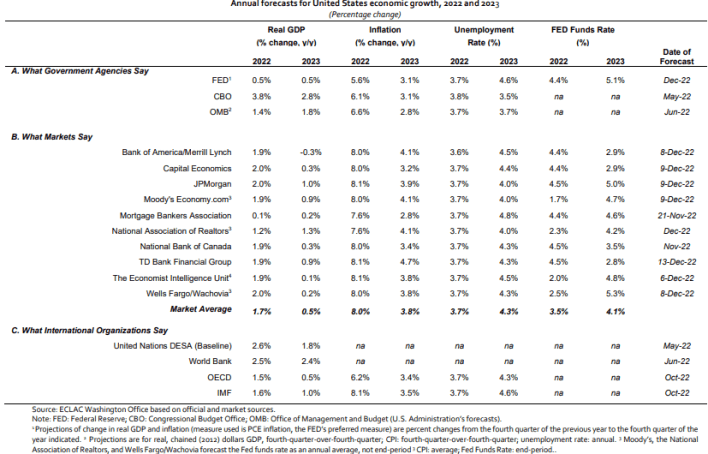 Inventories and housing investment contributed negatively, subtracting 1.0 and 1.4%, respectively, to growth in the quarter.