Two factors are associated with the increase in transport costs in the world, highlighted the European Central Bank (ECB).

At the same time, container shortages in Asian ports have exacerbated supply bottlenecks and increased shipping costs further, as Asian companies are reported to pay higher fees to retrieve containers.

Ports in Europe and the United States are reportedly congested amid logistical disruptions related to the coronavirus pandemic (Covid-19) and inactive containers remain in several ports due to uneven trade recovery.

In particular, available data points to a decrease in container ship traffic from major Asian ports, with the Asia-EU trade route experiencing the greatest decline.

Against this backdrop, global container service schedule reliability has dropped to the lowest levels on record, according to new data from SeaIntelligence Consulting.

Rising transportation costs have been further compounded by limited air cargo capacity, as international flight volumes have plummeted due to travel restrictions and flight cancellations.

Since the second half of 2020, global freight costs have been on a steady recovery path from lows reached amid the pandemic. 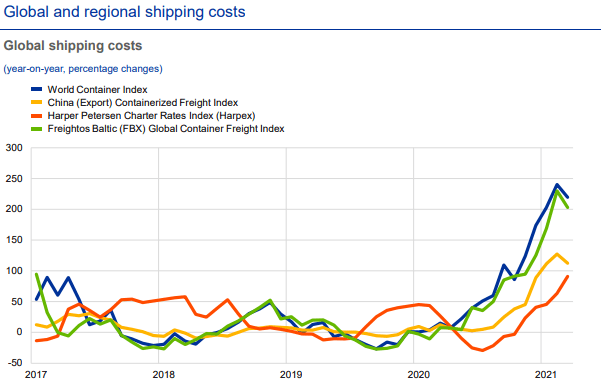 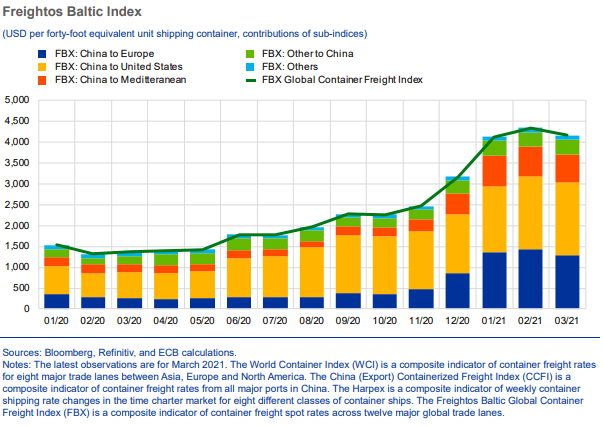 In recent months, however, they have reached levels not seen since the Great Financial Crisis, while growth rates have exceeded those seen since 2015.

Simultaneously, shipping costs on shipping routes from Asia and China to Europe and the Mediterranean, as well as the United States, have seen a particularly steep rise since the second half of the year.

Raw material shortages and bottlenecks in transportation and logistics were driving up input prices, but the wage outlook remained subdued.

The rise in prices of many raw materials and related inputs had accelerated in recent months in view of the imbalances in global supply and demand.

However, several contacts anticipated that commodity prices would peak in the coming months and could begin to moderate a bit later in the year.