The automotive industry has also experienced a period of sustained increases in commodity prices, especially those related to steel and, to a lesser extent, petrochemicals.

At the same time, shipping costs have risen significantly in recent months. 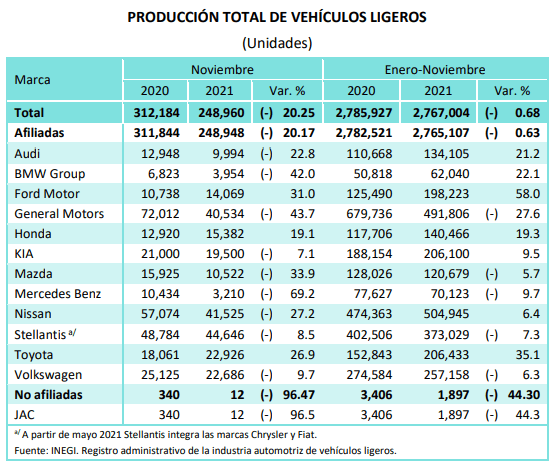 At interannual rates and considering the period from January to November 2021, BMW’s production in Mexico climbed 22.1%, to 62,040 units, according to Inegi data.

In particular, Mercedes Benz production is associated through Nissan-Daimler, Hyundai produces through its partner Kia, and BMW is building a plant in San Luis Potosí.

Together these companies produce more than 40 makes and 500 models. Around 82% of vehicle production is dedicated to exports, while the remaining 18% is destined for the Mexican national market.

As of May 2021, Stellantis integrates the Chrysler and Fiat brands. The INEGI publishes the administrative records of the Automotive Industry of light vehicles that develops in the country, from 23 companies affiliated to the Mexican Association of the Automotive Industry, A.C. (AMIA), Giant Motors Latin America and Autos Orientales Picacho, such as sales to the public in the domestic market, production and exports for the month of November of this year.