In its trade profile, the United States stands out for being the largest importer of products in the world in 2020, with 2 trillion 407.527 million dollars.

At the same time, it ranks as the second largest merchandise exporter globally, with 1 trillion 431.610 million dollars.

How much are those two figures? The first covers 13.5% of the total imports of goods worldwide in 2020 and the second represents 8.13% of the total external sales on the planet.

Among the agricultural products that the United States sold the most to the world in the past year are: soybeans (soybeans), even broken (25,851 million dollars), corn (9,575 million), the other nuts, fresh or dried (7,845 million ), wheat and morcajo (6,318 million) and other food preparations (6,212 million). 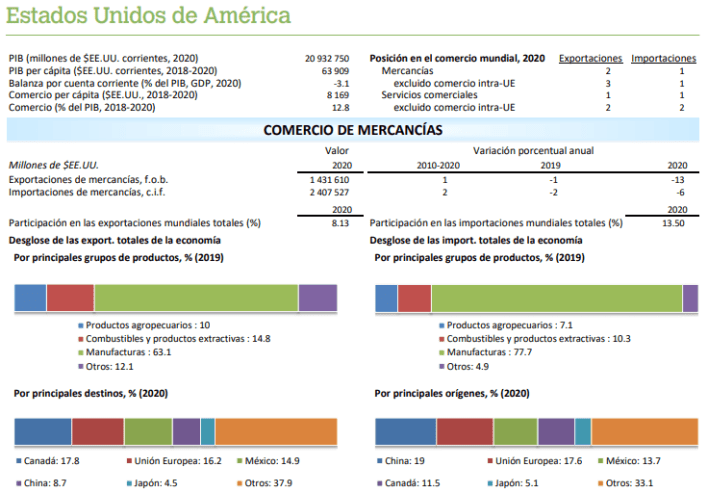 Conversely, the following were the largest exports of agricultural products from the United States, according to the World Trade Organization (WTO): alcohol with an alcoholic strength by volume <80% (8,901 million), other food preparations (6,562 million), products of bakery, pastry or biscuit (6,445 million), malt beer (5,977 million) and wine from fresh grapes (5,884 million).

Likewise, the United States’ foreign trade as a percentage of its GDP averaged 12.8% in the last three years.

The United States was also the largest exporter and importer of commercial services in the world last year, 684,001 and 435,748 million dollars, respectively.