Toyota and BMW Group were ahead in the recovery of light vehicle production in Mexico from January to May 2021, reported Inegi.

At a triple-digit rate (119.1% year-on-year), the BMW Group’s production was the strongest recovery, with 30,774 units during the first five months of the current year.

According to a count by Banxico, economic activity in Mexico exhibited a slowdown in its recovery rate in the first quarter of 2021.

This as a result of various events that occurred at the beginning of the year.

In particular, between the end of 2020 and the beginning of 2021 there was a resurgence of the pandemic, which led to the implementation of new restrictions to deal with it.

Added to this were some disruptions in the supply of certain industrial inputs, particularly in the automotive sector, as well as a temporary interruption in the supply of natural gas in mid-February in the northern region of the country.

Faced with these shocks, a weak performance was observed in January and a decrease in productive activity in February. 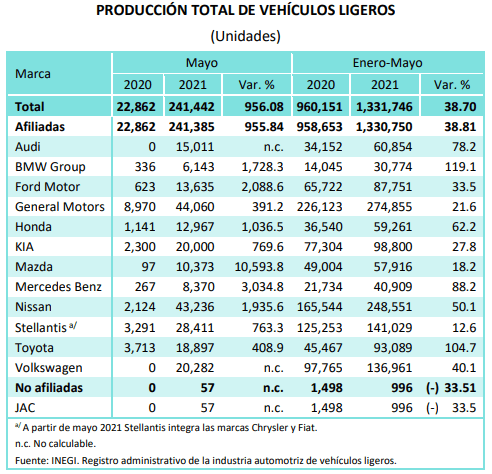 Subsequently, although some input supply problems persisted in the automotive industry, the sector’s production rebounded in March.

In addition, the reduction in the number of infections and the advance in vaccination have allowed the gradual relaxation of restrictions on mobility and production.

This led to a reactivation in March.

The aggregate behavior reflected heterogeneity in the level of recovery of the different economic sectors, with a relative better performance of industrial activity than of services.

The global spread of Covid-19 and responses from governments and other stakeholders have negatively affected auto companies in a number of ways.

For reasons such as government directives, as well as the anticipated reduction in demand for its vehicles, Toyota has temporarily suspended production of cars and components at select plants in Japan and abroad.

The pandemic has also affected, and is expected to continue to affect, the businesses of dealers and distributors, as well as some of the companies’ external suppliers and commercial partners.

Additionally, the global spread of Covid-19 and related issues have negatively affected businesses in a wide variety of industries, as well as consumers, all of which have negatively impacted the demand for Toyota vehicles and related financial services.

All in all, Toyota’s recovery is considered in front of the entire sector.