The international tourism sector will register in 2020 its worst performance in terms of the number of travelers and income, since 1950, highlighted the World Trade Organization (WTO).

Globally, the sector represents one in four of the net jobs created in the last five years and an estimated 10% of economic production.

In recent years, this industry has become a particularly important source of growth for many developing economies and several less developed economies, contributing more than a third of GDP in some economies in South Asia and Central America, for example.

The Covid-19 pandemic has triggered an unprecedented crisis in the sector.

For economies dependent on tourism activities, the sector has gone from being a source of growth to a vulnerability.

For example, in Vanuatu, where tourism accounts for 40% of GDP, 70% of tourism jobs have been lost since mid-March 2020, according to the government of this nation.

In Tanzania, the number of tourists visiting the Serengeti National Park dropped from 6,000 a day to 24 in the wake of the crisis.

In Rwanda, about 20 conferences and meetings scheduled for March and April, which were expected to generate around $ 8 million for the economy, were postponed as a result of the travel ban. 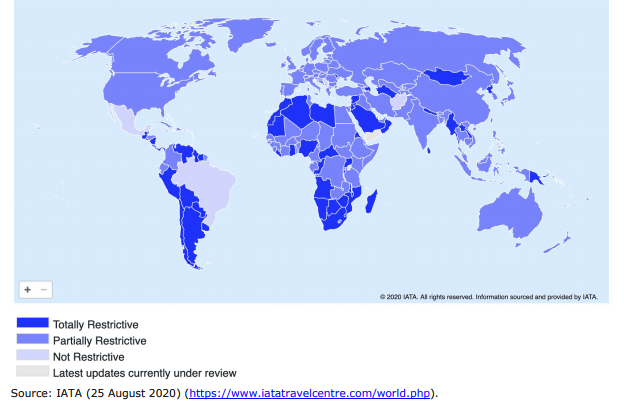 In an attempt to recover the revenue lost due to the collapse of international arrivals, some WTO members are trying to boost domestic tourism and, as a second step, revive this sector regionally.

However, this means that regions dependent on foreign tourists are likely to have a greater impact.