Among the main imports of the United States are automobiles, oil and medicines, according to data from the International Trade Commission (USITC).

From abroad, Americans bought certain passenger vehicles for a customs value of $ 80.203 million, a decrease of 22.1% year-over-year. 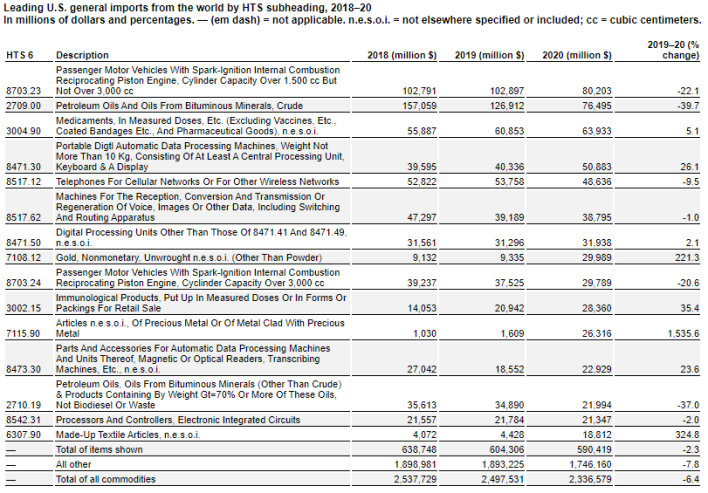 On the contrary, external purchases of medicines were 63.933 million dollars, an annual advance of 5.1%.

Other notable imports were laptops, cell phones and gold.

More recently, economic growth in the United States slowed slightly at a moderate pace from early July to August 2021.

According to the Beige Book, the strongest sectors of the economy in recent times included manufacturing, transportation, non-financial services, and residential real estate.

In part, the slowdown in economic activity was due to a decline in dining, travel and tourism in most districts, reflecting security concerns due to the rise of the Delta variant and, in some cases, the international travel restrictions.

The other sectors of the economy where growth slowed or activity declined were those constrained by supply disruptions and labor shortages, as opposed to declining demand.

At the same time, non-auto retail sales growth slowed somewhat in some districts, increasing at a modest rate across the country overall.

On the other hand, trends in loan volumes varied widely across districts, from a modest decline to a sharp rise.

Reports on the agriculture and energy sectors were mixed across all districts but generally positive.

Looking ahead, businesses in most districts remained optimistic about the near-term outlook, although widespread concern about continued supply disruptions and resource shortages remained.