The IMF considers the statistics for China in this case to include mainland China, Hong Kong, Taiwan and Macau.

According to its projections for 2022, world cheese exports in 2022 will total 3.6 million tons, which is 1.0% higher than in 2021, driven by higher expected imports from the United Kingdom, Mexico, Saudi Arabia, Republic of Korea, El Salvador, Canada and the United States.

From the IMF’s perspective, these increases are likely to be largely offset by significant reductions in imports from the Russian Federation, Australia, the Philippines, China, Chile, and Japan.

In particular, the United Kingdom is heading for a partial recovery in cheese imports, mainly from the European Union, reflecting the likely relaxation of customs control.

Mexico could also import more cheese, reflecting the revival of the food processing sector. The growing popularity of cheese is also expected to boost imports. 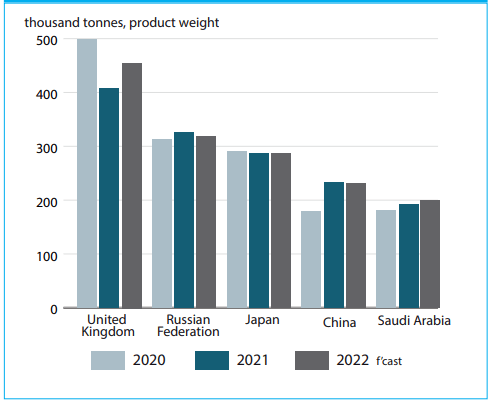 Regarding China, cheese imports to that nation are forecast to decline moderately in 2022, due to the economic slowdown, Covid-19 pandemic restrictions and ongoing closures that disrupt the supply chain and reduce domestic demand.

Conversely, the Russian Federation could import less cheese due to low consumer purchasing power, while currency fluctuation and rising prices could deter cheese purchases by the Philippines.

Given strong demand from Mexico, the United States may also export more cheese.

The United Kingdom could increase cheese exports, especially to the European Union.

In contrast, in New Zealand, cheese exports could decline moderately. Egypt could also decrease shipments due to limited export availabilities.