China, India, Japan, the United States and Russia make up the leading five countries among the world’s largest steel producers, according to the World Steel Association (worldsteel).

Headquartered in Brussels, Belgium, worldsteel is a non-profit organization and each year publishes a list of the largest producing companies in the field. 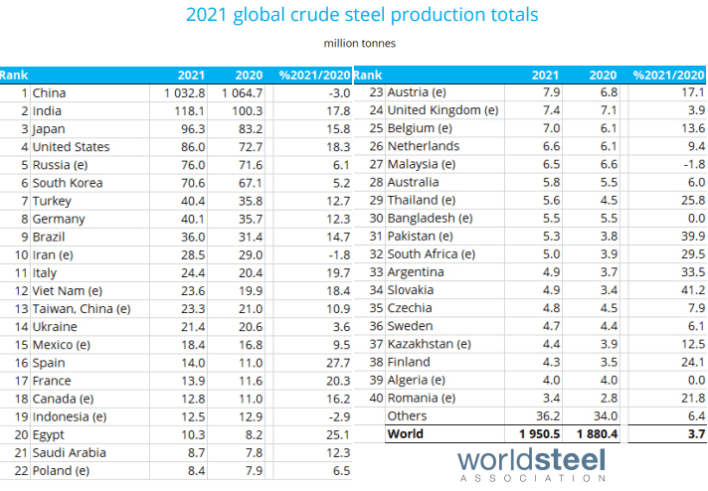 Historically, according to the Gerdau company, the steel industry has suffered from excess production capacity, which in recent years has worsened due to a substantial increase in production capacity in emerging countries, particularly China and India and other emerging markets.

In addition, China and certain steel exporting countries have favorable conditions (excess steel capacity, devalued currency, or high market prices for steel products in markets outside of these countries) that can significantly affect the price of steel in other markets.

Other of the world’s largest steel producers were, in descending order, South Korea, Turkey, Germany, Brazil and Iran.

For its part, the company US Steel considers that its main integrated steel competitors in North America and many Europeans face substantially similar environmental regulatory conditions and, therefore, does not believe that its relative position with respect to said competitors is affected. materially affected by the impact of environmental laws and regulations.

However, if future regulations do not recognize the fact that the integrated steelmaking process involves a series of chemical reactions involving carbon that generate carbon dioxide (CO2) emissions without linking these emissions to scrap steel as well, its competitive position in relation to minimills will be negatively affected.

In the meantime, its competitive position compared to producers in developing countries such as China, Russia, Ukraine, Turkey, Brazil and India will suffer unless those countries require proportional reductions in CO2 emissions or there are border adjustment fees for the CO2.