Among Ontario, Canada‘s top imports, motor vehicles and auto parts stand out in first place, worth 65.7 billion Canadian dollars in 2021. 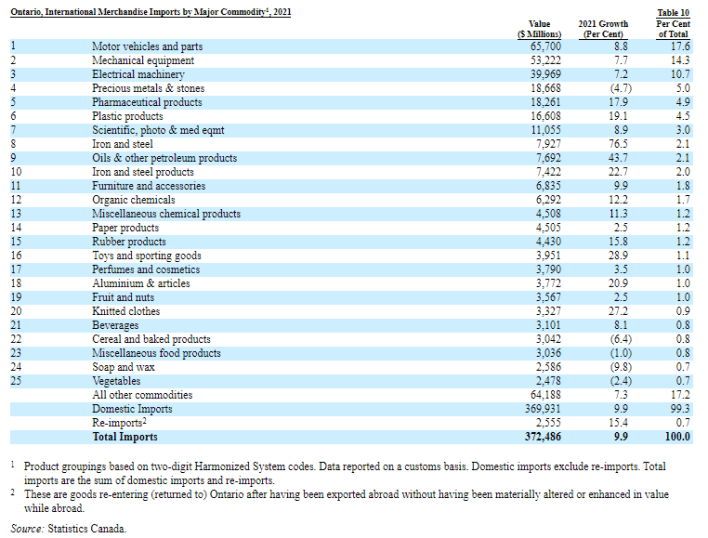 Since 2002, both Ontario’s and Canada’s populations have increased at an average annual rate of 1.1 percent.

The population of the Greater Toronto Area, Canada’s most populous metropolitan area, was estimated at 7.1 million on July 1, 2021.

Canada is a federal state composed of 10 provinces and three territories.

In 1867, the Parliament of the United Kingdom passed the British North America Act, creating the Canadian federation composed, at that time, of the provinces of Ontario, Quebec, Nova Scotia and New Brunswick.

Ontario is also a major importer of plastic products; scientific, photographic and medical products; iron and steel; oils and other petroleum products; and steel products.

In response to the invasion of Ukraine, on March 2, 2022, Canada withdrew eligibility for Most Favored Nation (MFN) tariff treatment for virtually all goods originating in Russia and Belarus, resulting in the application of the 35% General Tariff to these imports.

This trade measure is still in place and is accompanied by Canada’s import ban on Russian petroleum products, implemented on March 10, 2022.

To address the exceptional circumstances of the illegal war and its impact on the Ukrainian economy, on June 9, 2022, Canada also implemented a temporary one-year exemption from tariffs and trade remedy duties on imports originating in Ukraine.