China and Mexico ranked as the largest importers of US corn in 2021, according to USITC figures.

According to the Peterson Institute for International Economics (PIIE), products such as pork, corn, wheat and sorghum exceeded expectations in terms of US exports to China, although not necessarily because of the Phase One agreement.

In particular, corn and wheat imports surged after China began to comply with a 2019 World Trade Organization (WTO) dispute settlement ruling against its unfilled quota.

For its part, imports of US corn to Mexico were 4,781 million dollars, an increase of 75% at the annual rate.

According to the Department of Agriculture, Mexico is the seventh largest producer of corn in the world, with approximately 2.5% of the world’s corn production.

Approximately 72% of Mexican corn is obtained on average from the spring/summer season. 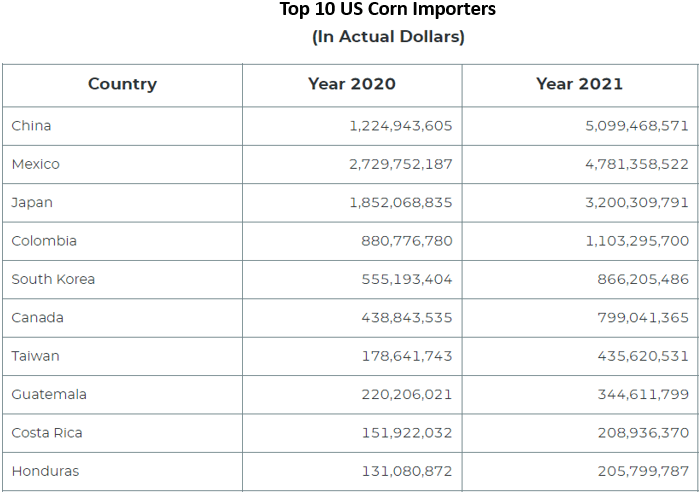 Likewise, corn remains the largest crop in Mexico in terms of production and consumption.

Despite its relevance as a main crop, several factors continue to prevent an increase in maize production (as well as other coarse grains and cereals) in Mexico.

The main constraint is low productivity. The two main producing states in Mexico are Sinaloa and Jalisco, which produce mainly white corn.